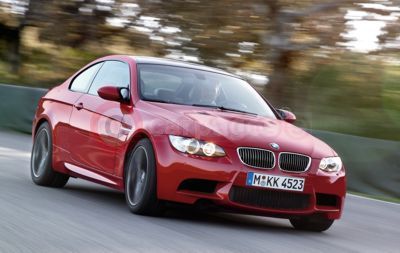 Today BMW UK has announced details of the new BMW M3 Coupé, a model that 21 years ago created an entirely new segment for super-high-performance compact cars. In the past two decades and three previous generations, the M3 has proved a success on road and track. Originally powered by BMW’s first 16-valve four-cylinder engine and subsequently by 3.0-litre and 3.2-litre powerplants, BMW M3 engines took top category honours on a record six successive occasions in the Engine of the Year awards. Racing derivatives have also won more Touring Car titles than any other car as well as numerous Endurance races.

With DNA connecting the new M3’s engine to that of the BMW Sauber F1 Team, the racing link is maintained in the fourth generation M3. The new M3 Coupé engine develops 420hp at 8,300rpm and 400Nm of torque at 3,900rpm from its 3,999cc V8-power unit, and red-lines at 8,400rpm. To highlight the flexibility of the engine, 85 per cent of torque is available from 6,500rpm. Power is transferred to the road by BMW M’s six-speed manual gearbox and variable M differential which conveys up to 100 per cent of available power to the wheel with most grip.

Like its predecessor, the new V8-powered BMW M3 easily breaks through the magical 100hp per litre barrier, offering 105hp per litre. This engine powers the car from zero to 62mph in 4.8 seconds and on to a limited top speed of 155mph. However, these supercar levels of performance do not compromise economy with the car still delivering 22.8mpg on the combined cycle, being an eight per cent improvement over the outgoing car.

BMW EfficientDynamics This relative frugal economy is delivered, in part, thanks to BMW’s EfficientDynamics programme. Far from only influencing the smaller-engined cars in the range, EfficientDynamics offers benefits to one of the most sporting cars offered by BMW, courtesy of Brake Energy Regeneration. This technology uses an Intelligent Alternator Control and Absorbent Glass Mat battery to recognise when the engine is on over-run and activates the alternator to charge the battery with what would previously have been wasted energy.

Another facet of BMW’s EfficientDynamics programme is lightweight technology. The previous-generation M3 CSL showed how carbon-fibre could be used by BMW in limited-volume production cars. The new M3 Coupé is the first full production car in its class to feature a carbon-fibre-reinforced plastic roof panel with exposed weave. In isolation, the carbon-fibre roof panel saves 5kgs over a conventional roof panel but it also lowers the centre of gravity to contribute to the M3’s benchmark driving dynamics.

The drivetrain in the new M3 Coupé features lightweight, but high-strength, materials. Using an engine block manufactured alongside F1 engines at BMW’s light-alloy foundry at Landshut, Germany, the new V8 powerplant weighs a mere 202kgs, 15kgs less than the six-cylinder engine it replaces. To further highlight the weight advantages, the crankshaft in the new engine is made from one complete forging and weighs only 20kgs. Additionally, the front axle components are constructed entirely from aluminium. Even the five-link rear axle, normally constructed from high-strength steel, has aluminium components to save weight. The control arms and dampers alone are 2.5kgs lighter than conventional parts.