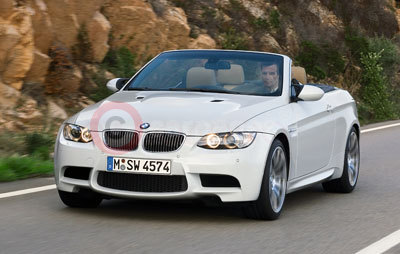 The launch of the new BMW M3 Convertible also represents another first with the introduction of BMW’s new seven-speed M Double Clutch Transmission (M DCT) as an option to the standard six-speed manual gearbox.  Offering the highest levels of performance and driving dynamics with instantaneous gear shifts, the new BMW M3 Convertible offers a unique recipe for drivers who enjoy open-topped motoring accompanied by an eight-cylinder symphony.

The first generation of M3 Convertible, launched in 1988, delivered 200hp from BMW’s first 16-valve 2.3-litre four-cylinder engine.  Subsequent generations of M3 engines have taken top category honours on a record six successive occasions in the Engine of the Year awards.

Wind the clock forward 20 years to the introduction of today’s E93-generation M3 Convertible.  The new M3 Convertible’s engine develops more than twice the power of the original, delivering 420hp at 8,300rpm and 400Nm of torque at 3,900rpm from its 3,999cc V8-power unit.  Like the previous three generations, the engine in the new M3 Convertible easily breaks through the magical 100hp per litre barrier, offering 105hp per litre.  The new car also offers a 10 per cent improvement in the power-to-weight ratio when compared to its predecessor E46 M3 Convertible.

The V8 engine powers the car from zero to 62mph in 5.3 seconds and on to an electronically-limited top speed of 155mph.  However, even with these supercar levels of performance, BMW’s EfficientDynamics programme ensures that economy is not compromised with the car delivering 21.9mpg on the combined cycle.

In standard specification, power is transferred to the road by BMW M’s six-speed manual gearbox and variable M differential.  This conveys up to 100 per cent of available power to the wheel with most grip.

Purchasers of the new M3 Convertible, along with M3 Coupé and M3 Saloon buyers, can now also specify BMW’s new seven-speed M DCT Double Clutch Transmission with Drivelogic.  Changing gear using either paddles on the steering wheel or the gear lever, the new M DCT gearbox uses two oil-cooled wet clutches, one controlling gears 1, 3, 5 and 7 and the other controlling gears 2, 4 and 6.  With gear changes made in only a few milliseconds and the next gear selected in readiness, the M DCT-equipped car outperforms the manual gearbox car in outright performance, economy and emissions.  The zero to 62mph sprint is reduced by 0.2 seconds to 5.1 seconds while the combined consumption improves by 1.1mpg and the CO2, emissions decrease by 16g/km to 293g/km.

In common with the Sequential Manual Gearbox on the M5 and M6 models, the new M DCT gearbox also features Drivelogic to allow the driver the ability to fine tune the shift characteristics of the transmission.  With six shift speeds available in the manual mode and five available when the gearbox is pre-selecting its own ratio, the driver can fine-tune the gear change.  And to ensure that the gear changes are perfectly tuned to the engine output, the new M DCT gearbox employs eight LED shift lights, located in the rev counter, to warn the driver of the need to upshift.

Finally, to guarantee ease of use in around-town driving situations, the new M DCT gearbox uses a gradient detection system and Low Speed Assistant.  These combine to ensure that the car won’t roll back on hill-starts and that the engine’s high levels of output don’t corrupt the driving experience at slower speeds.