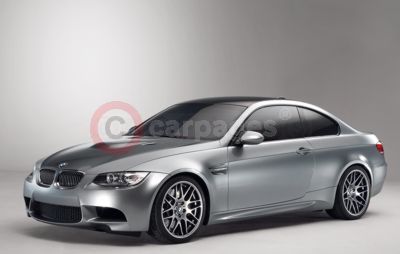 The name M3 is a symbol of unique performance on the racetrack and in everyday motoring. For more than two decades, the BMW M3 has represented the athletic heart of the brand in its most fundamental and succinct form. Its dominating role in motor sports and the ultimate driving experience it affords the driver on the road are inseparably intertwined. Such qualities have given the BMW M3 the exceptional status it enjoys the world over.

At BMW M GmbH, engineers have used this experience to create the new BMW M3 Concept Car. The concept study presented to the public for the first time at the 77th International Motor Show in Geneva (8th to 18th of March, 2007) gives a first impression of what a future BMW M3 might look like.

The BMW M3 Concept Car, with its Chrome Shadow exterior finish characteristic of previous BMW M GmbH concept studies, is a derivative of the new BMW 3 Series Coupé. However, few components are adopted directly from the ‘standard’ model. Just the headlights, rear light clusters, the two doors and the boot lid are carried over.

All other components were specially engineered for the BMW M3 Concept Car, lending the vehicle a unique look that accentuates its superior power. Features that make the BMW M3 Concept Car stand out are the bespoke front and rear bumper and spoiler designs, a bonnet with a bulging powerdome plus two air vents, side gills complete with M-designation on the front wings, side skirts and double strut exterior mirrors as seen on previous BMW M cars.

Faithful to the principle of “form follows function” in designing the body for the concept study, designers at BMW M GmbH used elements that not only visually emphasise the increased sportiness of the vehicle, but also serve a technical purpose. Conspicuous at the front are three large air intakes below the cooling grille that supply the engine with additional intake and cooling air. Strong, vertical struts delineate the air intakes and enhance their characteristic form.

The aluminium engine compartment lid exhibits a wide, bulging powerdome. Like the air vents to either side of it, the powerdome hints at the great potential expected of the powerplant destined for the engine bay of any forthcoming all-new BMW M3. The M3 Concept Car features a high-revving V8 engine that could be used to power a car should it go into production.

The contours of the M3 Concept Car and its bespoke front spoiler and bumper design mean the vehicle is longer than the ‘standard’ BMW 3 Series Coupé. The muscular front wheel arches of the BMW M3 Concept Car symbolise the high level of agility and driving stability achieved by this vehicle. Together with the forged 19-inch Y-spoke design light alloy rims, the vehicle’s wide track is emphasised, while a glance through the spokes of the rims reveals the compound high performance brakes developed exclusively for previous M vehicles.

The opening behind the wheel arch on the front wing has an elaborate form that is split by a discreet chrome bracket containing the direction indicator and the M3 logo. Two arched surfaces form the pronounced side skirt, creating a distinct contrast between light and shadow. The incidence of light on the sharply defined rear wing and wheel stresses the dynamic character of the vehicle and visually highlights its rear-wheel drive configuration.

Exclusive exterior mirrors developed for the BMW M3 Concept Car feature black double connecting struts. Even this small detail is in keeping with the principle of “form follows function”. With their horizontal contour line and tapered outward shape, the mirrors not only contribute to the overall impression of the vehicle, but also to their aerodynamic profile, keeping drag to a minimum.

The rear of the M3 Concept Car further enhances the muscular stance of the vehicle. A discreet spoiler lip on the boot lid, also called a Gurney flap, channels the air at the rear for optimum downforce while reducing lift on the rear axle. The contours of the diffuser, the design of which is subdivided by modelled struts, mirror the shape of the air intakes at the front. The diffuser and the double exhaust tailpipes positioned close to the vehicle’s longitudinal axis appear to pull the rear together at the centre and build up a tension in conjunction with the horizontal lines of the bumper.

The BMW M3 Concept Car is the latest showcase for BMW’s use of advanced weight saving technology and the clearest demonstration of this on the car is its roof. Specialists at the BMW Plant in Landshut, Germany, constructed the carbon fibre reinforced plastic (CFRP) roof using an exclusive production method taken from the firm’s experience in Formula One. Courtesy of a clear lacquer the carbon-fibre weave is still clearly visible.

As a highly visible advanced technology component, the CFRP roof dominates the technically innovative appearance of the BMW M3 Concept Car. Seen from the side, the roof edge appears flatter and thus lowers the perceived body height. Apart from the appearance, the CFRP roof also offers a real technical advantage being considerably lighter than a steel roof. This not only reduces the overall vehicle weight, but by reducing the weight of the highest element in the body, the centre of gravity is also lowered to produce a better balanced car. The CFRP roof is a perfect example of how interlinking technical innovation with an individual design strategy was central to the development of the BMW M3 Concept Car.

Following the tradition of the previous three generations of the BMW M3, this concept study represents a high performance sports car interpreted for use in everyday driving. The BMW M3 Concept Car shows where the ultimate driving experience strategy will take BMW in the future.