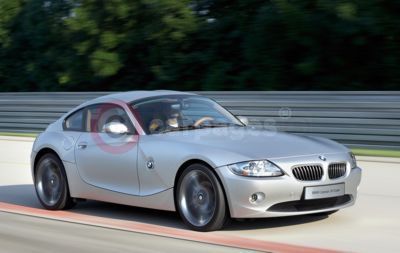 The striking new BMW Concept Z4 Coupé could be the inspiration for a new, dynamic Z4 model and harks back to the rare and respected Z3 Coupé of the ’90s. Powered by BMW’s new magnesium-alloy 3.0-litre engine developing 265hp and 315Nm of torque, its engine would power a production model of the Concept Z4 Coupé from zero to 62mph in approximately 5.7 seconds and on to a limited top speed of 155mph.

The Concept Z4 Coupé carries over much of the technology already seen in the Z4 roadster, such as Electric Power Steering and DSC stability control. The Coupé also clearly takes much of its styling from the acclaimed BMW Z4 roadster. Using the roadster’s chassis as a strong and rigid basis, the Concept Z4 Coupé benefits from an additional hardtop and large hatch-style boot lid to provide the highest levels of body stiffness. Finished in silk-matt Glacier Silver paintwork, Nubuck leather interior and sitting on dramatically styled 19-inch smoke-finished alloy wheels, the BMW Concept Z4 Coupé was ‘Frankfurt’s show stopper’, according to one weekly motoring magazine.

In his speech at the IAA, Frankfurt, Chairman of the Board of Management of BMW, Dr Helmut Panke confirmed a production version of the Concept Z4 Coupé would be built in the foreseeable future.

Active Transmission, automatic engine start / stop, High Precision Injection and Brake Energy Regeneration, the Concept X3 EfficientDynamics achieves an increase in performance whilst improving on the combined fuel consumption by up to 20 per cent over the standard X3.

Whenever the driver applies the brakes and slows to a standstill, the petrol engine is switched off, negating fuel consumption and emissions. At the same time, the electric motor is converted into an alternator, recharging the power supply. When the accelerator is depressed, the engine restarts automatically.

Power storage and supply comes from innovative double-layer capacitors or Super Caps, located in the vehicle sills. Offering over 10 times more capacity per kilogram than conventional nickel / metal hydride batteries, Super Caps have an overall capacity of 190kW - more than adequate for the car being driven in fast, dynamic situations.