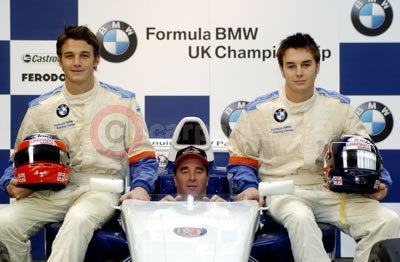 BMW UK Ltd today extended its commitment to Formula BMW with the announcement of an exclusive partnership with Formula One legend Nigel Mansell, who is set to join the Formula BMW UK Championship as ambassador and help groom future F1 stars, including his two sons Greg (17) and Leo (21).

The world of motor sport thought it had seen the last of the name Mansell emblazoned on the side of a Formula One car when Nigel retired in 1994. But the possibility of that famous name finding its way into motor sport’s top flight is now much stronger, with his sons Greg and Leo set to compete against other stars of the future in the Formula BMW UK Championship.

Formula BMW is the world’s leading entry-level class in Formula racing. The BMW Education and Coaching Programme introduces talented young drivers to all the various demands of professional motor racing. As well as driving tuition and mentoring from Mansell, drivers receive tuition on other important aspects of the sport like physical fitness, technology, sponsorship and media training.

Despite their father’s illustrious motor sport career, Greg and Leo have only just started to walk in their father’s footsteps, with just two years karting experience. However, starting late has proved to be no impediment to Leo and Greg who have shown that they have more than just the name in common with their father. At a recent test the junior Mansells were both faster than the previous fastest Formula BMW lap at Pembrey race circuit, despite it being the first time either of them had driven this type of car.

To support Formula BMW, Nigel will be attending race meets and training session throughout next season. Commenting on his sons’ debut in the UK Championship the 1992 World Champion said: "Greg and Leo have both done some karting in recent years and they have shown that they can cut it at that level. Both of them have decided separately that they would like to take their motor sport careers to the next level. We spent time together looking for the best championship for them to compete in and Formula BMW fits that bill perfectly."