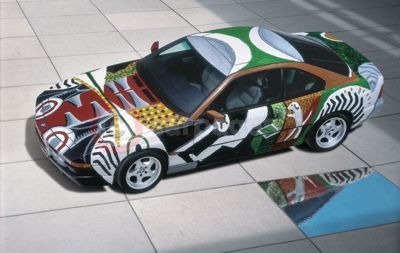 From Art Cars to Bond films, Hockney and Warhol, to London Design Museum lectures, BMW has, in recent years, maintained a relationship with the arts. This relationship continues through 2005 and into 2006 with a number of innovative, challenging and interesting activities and events at venues such as Tate Modern, the Royal College of Art and London’s Frieze Art Fair.

From 21-24 October, a fleet of chauffeur-driven BMW 7 Series will be available to the Frieze Art Fair’s 2,500 VIPs in London’s Regent’s Park. The UK’s most successful contemporary art fair then hands over to the world’s most popular equivalent, with BMW again the official limousine at the USA’s Art Basel Miami Beach from 1-4 December.

Throughout November, 18 first-year Vehicle Design students at London’s Royal College of Art will be designing works of art from genuine BMW parts and, on 7 December, Chris Bangle, the director of BMW Group design, has been invited to present a lecture as part of the D&AD’s 2005 President’s Lectures programme of talks and forums.

Looking ahead to 2006, BMW UK will be title sponsor of one of Tate Modern’s major retrospectives that features two of the most influential artists from the Bauhaus school and the 16th BMW Art Car will be completed later in the year by the Danish-born artist and environmental champion, Olafur Eliasson. His ‘canvas’ will be a version of BMW’s record-breaking hydrogen-powered car, the H2R.

Uwe Ellinghaus, BMW (UK) Ltd’s marketing director said: "As you would expect from a company that prides itself on its design heritage as much as its engineering, it is vital for us to communicate with the art world and all those consumers stimulated by the arts. Whether the art in question is a film, a painting, architecture, a sculpture or, even a car.

"Over recent years BMW has surprised and delighted many people with our creative direction. Our car and motorcycle ranges are, visually, the most distinctive in the world, Zaha Hadid designed our latest production facility in Leipzig, we have featured James Brown, Gary Oldman, Clive Owen and Madonna in award-winning short films, and we are now challenging art students to develop works of art from BMW parts. It is clear to see that, just as motorsport and golf sit naturally with our brand on a sporting level, so do the creative disciplines on an emotional level," Ellinghaus concluded.