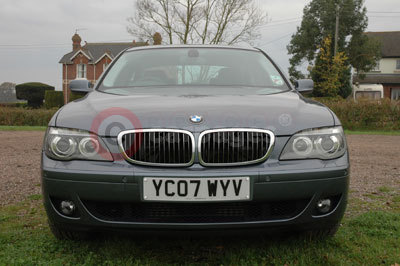 It is difficult to believe that the current BMW 7 Series has been with us for over five years since its launch in the UK in March 2002.

Billed as BMW’s flagship model the 7 Series has a lot to live up to, the previous model had a shelf life of nearly eight years. We tested the 7 Series to see if BMW set the benchmark in flagship executive cars, with their attention to driving dynamics.

When the BMW 7 Series was first introduced to the UK there wasn’t a diesel model, but with the diesel powered Mercedes Benz S Class C320 CDi accounting for over 50% of all S Class sales, BMW knew there was a market for a luxury diesel executive saloons and soon introduced their diesel V6 2993 cc engine to the 7 Series line up.

Of course now all the major executive car producers have a diesel model within their range, from Audi to Jaguar, you will find a diesel option. Diesel engines in executive cars make perfect economic sense, sub 20 mpg is no longer an option with increasing fuel prices, and now that most diesel engines are nearly as refined and as quick, if not quicker than their petrol equivalent it makes perfect driving sense.

The diesel powered 730d range now accounts for around 56% of all 7-Series sales, we opted to drive the long wheel base BMW 730Ld SE.

We opted for the diesel engine, which probably makes the most economic sense - our variant was the long wheel base BMW 730Ld SE.

To ensure its popularity, the 730d engine has been extensively revised and it now benefits from an all-aluminum cylinder block that reduces the weight of the engine by 25kgs. As a result of this weight reduction and BMW's new third-generation common rail diesel technology (that includes piezo-injectors, a faster and more efficient form of injection); power is increased by 12 per cent to 228bhp at 4,000rpm while torque is four per cent higher at 520Nm, developed between 2,000 and 2,750rpm.