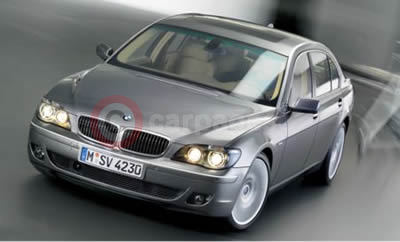 Building on the global success of the most successful 7 Series

Three years after its debut BMW has announced the first details of a mid-life revision of the 7 Series, due for launch in spring 2005. Receiving a range of new engines, interior fine-tuning, dynamic developments and exterior styling enhancements, the new 7 Series promises to build on the global success of the car that broke the mould and set a new agenda in the luxury sector.

BMW Great Britain’s Managing Director, Jim O’Donnell, commented, "At its UK launch in 2002, the 7 Series marked a radical departure from traditional, conservative luxury car design. While some in the media questioned the styling, customers were clearly attracted to its uniqueness and driving dynamics and the car has become the best-selling 7 Series ever. I am confident that the new engine range and subtle refinements will ensure the new 7 Series continues this success in the years to come."

The new 7 Series offers customers the widest model range of any luxury car manufacturer, all of which (excluding the 760i) have new engines, updated to deliver more power and flexibility without compromising fuel economy.

In the UK, the biggest seller in the range is the 730d that accounts for 56 per cent of total 7 Series sales. To maintain its popularity, the 730d engine has been extensively revised and it now benefits from an all-aluminium cylinder block that reduces the weight of the engine by 25kg. As a result of this weight reduction and BMW’s new third-generation common rail diesel technology (that includes piezo-injectors, a faster and more efficient form of injection), power is increased by 12 per cent to 228bhp at 4,000rpm while torque is four per cent higher at 520Nm, developed between 2,000 and 2,750rpm.

The 730i now features the new lightweight 3.0-litre magnesium aluminium composite engine recently unveiled in the 630i and 330i. The new powerplant delivers 258bhp at 6,600rpm, up 12 per cent compared with its predecessor, and 300Nm of torque at 2,500 - 4,000rpm. As a consequence, the new 730i offers the best power-to-weight ratio and highest output per litre of any car in its class.

This extra performance was not achieved at the expense of fuel consumption. The 730i delivers an impressive 28.0mpg, a 4.7 per cent improvement over the outgoing car. The improvements in power and economy come primarily as a result of VALVETRONIC, BMW’s patented technology that regulates the volume of induction air without the need for a throttle butterfly. VALVETRONIC now features on all 7 Series petrol engines.