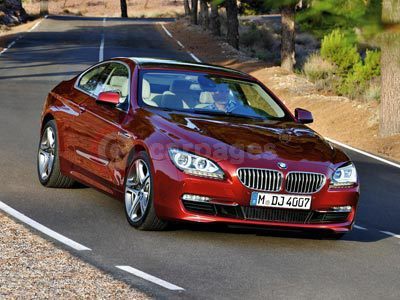 Now in its third generation, the new BMW 6 Series Coupe takes the luxury 2+2 concept a step further by matching enhanced comfort and elegant design with sporting performance on a even higher level.

Two BMW turbocharged petrol engines, a newly developed chassis and a host of class-leading driver assistance technology ensure that the new BMW 6 Series Coupe is full of substance, while interior space and comfort have been enhanced.

As standard the new BMW 6 Series Coupe is equipped with xenon headlights that have BMW's familiar double corona look while high-quality chrome elements, such as the fog lamps consisting of a string of three LED units, on the outer edges of the front apron accentuate the width of the car.

Despite its lower height, the new 2+2 BMW 6 Series Coupe offers greater headroom in both the front and the rear, and height adjustment of the driver and front passenger seats now cover a greater range too. The individual rear sets also provide passengers with additional shoulder and elbow room, making for more comfortable cruising.

The new BMW 6 Series Coupe is available from launch with two petrol engines: the 650i and 640i. Both offer unique character from their respective V8 and inline six-cylinder engines through the use of twin and single turbocharger technology to produce even more responsiveness, efficiency and higher power levels.

The 4.4-litre eight-cylinder engine in the new BMW 650i Coupe is unique in that the brace of turbochargers are positioned in the V-shaped area between the cylinder banks. This design results in more efficient packaging and greater engine efficiency. A maximum 407hp is developed between 5,500 and 6,400rpm, with peak torque of 600Nm available between 1,750 and 4,500rpm.

The new BMW 650i Coupe sprints from zero to 62mph in 4.9 seconds, with a top speed electronically limited to 155mph. For a model of such blistering performance and refinement, it is also extraordinarily efficient, with average combined fuel consumption of 27.2mpg and CO2 emissions of 243g/km.

The six-cylinder in-line engine in the new BMW 640i Coupe uses single turbocharger technology alongside petrol direct injection with VALVETRONIC fully variable valve control. This enables the 3.0-litre unit to develop a maximum 320hp at 5,800rpm and maximum torque of 450Nm between 1,300 and 4,500rpm. This engine propels the BMW 640i Coupe from zero to 62mph in 5.4 seconds and on to an electronically limited top speed of 155 mph.

The BMW 640i Coupe achieves 36.7mpg on the combined cycle, while CO2 emissions are only 179g/km, proving that at BMW luxurious sporting performance does not come at the expense of economy. Indeed, this model is fitted as standard with an automatic transmission that features Auto Start-Stop technology and an automatic active air flap control behind the car's kidney grille for optimum engine performance.

The BMW 640i Coupe debuts the fuel saving technology that is the ECO PRO mode. By a touch of the Drive Dynamic Control button ECO PRO mode tweaks the engine management system, accelerator mapping and gear-shift characteristics to favour a relaxed, low-revving driving style. At the same time, power usage for electronically operated functions such as climate control is regulated to ensure maximum efficiency. A display on the instrument cluster keep the driver informed of the levels of energy efficiency being achieved to encourage an economical driving style.

An eight-speed Sport automatic gearbox is standard fitment on both models, and its wide range of ratios offer a perfect balance of muscular, sprinting performance, refined high speed The BMW 6 Series Coupe goes on sale in the UK on 15th October 2011.  Prices will be announced at a later date.
Published : 15/03/11 Author : Staff