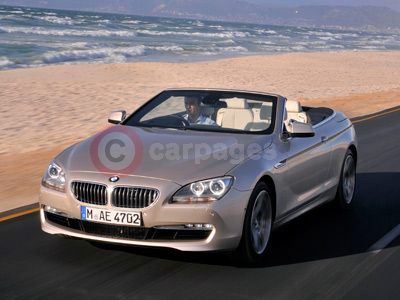 The luxurious yet dynamic driving experience of the new BMW 6 Series Convertible is reflected in the athletic elegance and sense-tingling sportiness of its exterior design. A long, sweeping bonnet, set-back passenger compartment, long wheelbase and flat waistline combine to create the proportions typical of a BMW convertible. The precise interplay of eye-catching lines and meticulously sculpted surfaces help to give the new BMW 6 Series Convertible its arresting looks.

Like the lines projecting out from the nose of the car and continuing along its full length, the harmoniously curved surfaces of the body take their cue from the movement of waves sent out by a the bow of a motor boat piercing the water. Continuing the theme, the waistline surface which leads the body into the interior mimics the character of a boat deck.

The new BMW 6 Series Convertible also displays its dynamic character in its front end design. The large, slightly forward-slanting BMW kidney grille - its "shark nose" - gives the car a sense of surging forward, while a broad air intake, strikingly contoured bonnet and muscular wheel arches hint at its powerful engine technology and impressive roadholding. High-quality chrome elements positioned on the outer edges of the front apron further accentuate the width of the car. The optional foglamps consisting of a string of three LED units are placed in front of these chrome elements.

The standard xenon headlights of the new BMW 6 Series Convertible pick up on the brand's familiar "twin round" look. As standard, an accent strip cuts across the top of them; this is replaced by an LED accent light if the optional Adaptive Headlights are specified. The daytime running lights take the form of LED light rings, whose bright white light illuminates the distinctive front end look. A horizontal light strip below the daytime running lights, meanwhile, performs direction indicator duties.

Uninterrupted, flowing lines lend the silhouette of the BMW 6 Series Convertible a sweeping elegance. Powerful curves mimicking the natural movement of waves give the car's side view a natural athleticism. The hallmark BMW swage line at door handle level is spawned in the front wheel arch gill - which houses the side indicator - and extends all the way back into the rear lights.

Another character line is released from the bulge of the front wing, stretching powerfully over the front wheel like a wave before dropping down and continuing horizontally towards the rear. Together with the swage line, it creates a dynamic wedge shape which emphasises the car's forward-surging character.

Wide and flat surfaces define the rear of the new BMW 6 Series Convertible. The dominance of horizontal lines adds extra emphasis to the wider track of the new car compared to its predecessor. In addition, downward-converging lines underline the car's focus on the road, echoing the approach at the front end. This distinctive V-shape is created by lines including the side edges of the boot lid, the licence plate surround and the contours of the reflectors positioned in the bumper. The slightly concave lower section of the boot lid produces light and shade effects which lend an extra lightness to the rear of the car.