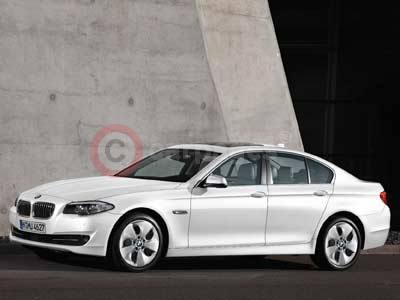 From September 2011, BMW will increase the number of engines in the 5 Series range to eleven, due to the introduction of the 520i and 528i models.

Across the BMW 5 Series range, Drive Performance Control is included as standard, which provides the driver with the ability to tune the ride and handling by selecting one of three modes: Comfort, Sport or Sport+.

Also included in all four and six cylinder models is the ECO PRO mode, which adjusts throttle sensitivity, engine response, the upshift points with the automatic gearbox and the power consumed by ancillaries such as climate control and heated mirrors.

The boot or - on the Touring - the rear window or tailgate can now be opened with a foot swipe under the rear bumper, assuming the correct key is detected.