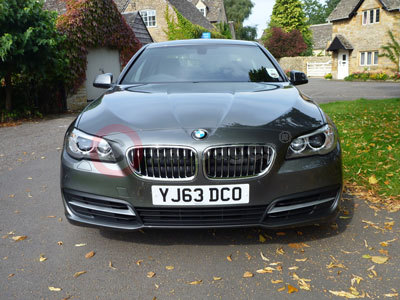 The current sixth generation BMW 5 Series is the most successful in its 41 year history with more than a million saloon sales in the last three years for the Bavarian premium car manufacturer.

And now the extensive line-up of Saloon, Touring and Gran Turismo models has been given a mid-life facelift featuring a package of technological innovations and subtle design modifications.

Cosmetic tweaks and tucks include a revised front end and the introduction of Xenon headlights as standard. The traditional kidney grille is more prominent and the indicators have been integrated into the door mirrors. LED lights have been added as standard on some models too. The new rear lights feature slender LED strips and they help to emphasise the car's width. There are also re-profiled bumpers.

There is a new chassis set up to improve ride and comfort. This is an important factor because in the past critics have often labelled the 5 Series as uncomfortable compared to its premium rivals.

The big news on the engine front is the introduction of the 518d which is powered by the 2.0-litre turbo-diesel engine used in the existing 520d. But engineers have detuned the engine so it produces 143bhp and 360Nm of torque.

This engine in entry level SE trim means there is a BMW 5 Series priced at less than £30k. And it has a BIK rating of 18% and is in VED band C which means no road tax for the first year and £30 each year thereafter.

At the other end of the scale is a new 2.2-litre twin-turbocharger direct injection V8 for the 550i Saloon, Touring and Gran Turismo models. This V8 develops 449bhp and 650Nm of torque and has a price-tag starting from £57,165 for the Saloon in Luxury trim.

The 5 Series is available in four trim levels - SE, Modern, Luxury and M Sport and there is a whole range of optional extras and packs to personalise each car.

All models are now more fuel efficient and BMW is well ahead of schedule to meet EU6 emissions targets which aims to clean up the motoring industry.

BMW also believes that the intelligent ConnectedDrive technology on offer throughout the range makes this 5 Series the most advanced to date improving safety, connectivity and convenience of all occupants on the move.

We tested the new entry level 518d Saloon in SE specification priced at £29,830 with a six-speed manual transmission. Our test route incorporated a range of country lanes and slower moving traffic in built-up towns.

With a 0-62 time of 9.7 seconds and a top speed of 132mph, the 2.0-litre turbo-diesel engine develops 143bhp and 360Nm torque. This is the car that BMW claims can achieve a combined fuel consumption figure of 62.8mpg and carbon emissions of 119g/km. On average we achieved 55mpg which is slightly lower than the official figure and although the car was not driven with a heavy foot there was quite a lot of stopping and starting en route which would have had an effect on fuel economy.

Acceleration through the gears was nice and responsive and there was next-to-no engine or road noise to speak of and although the 520d is easily the biggest seller of the 5 Series range, BMW believes that many buyers will be tempted into switching to the slightly less powerful 518d model.