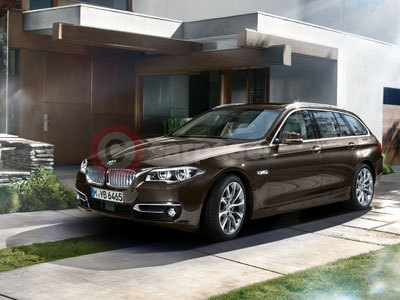 With over one million 5 Series Saloon alone being sold in the last three years BMW has enhanced the 5 Series line-up for 2013, with the focus on new technology with enhanced ConnectedDrive functionality and subtle revisions to the styling and suspension tuning.

On the safety front now that all 5 Series feature Business or the Professional Navigation system owners will also benefit from BMW Emergency Call which uses the built-in BMW SIM card to automatically contact the Emergency Services in the event of an accident, when any of the crash sensors are deployed or when the driver has requested assistance.

The optional Professional Media Package has been enhanced to include the latest Professional Navigation system with ConnectedDrive Services including Real Time Traffic Information and BMW Apps. This system includes the new iDrive Touch controller, allowing written entry of addresses and telephone numbers and an intelligent Route-ahead Assistant, which anticipates the forthcoming road conditions and provides advice to the driver on how to maximise an efficient driving style based on braking and acceleration points.

You can also opt for Driving Assistant which utilizes a camera-based driver assistance system designed to significantly reduce the risk of potential collisions at both high and low speeds. The system's attributes include a Lane Departure Warning, Front-end Collision warning and pedestrian recognition with pro-active and autonomous braking.

You can also add BMW Night Vision with pedestrian recognition which uses a thermal imaging camera to detect heat emitting objects and, in addition to acoustically alerting the driver of potential hazards, the fog light beam is directed to clearly illuminate the object ahead to maximise the reaction speeds of the driver.

There have been some nips and tucks with all 5 Series having Xenon headlights as standard with Adaptive LED lights now an option. The nose now features additional contour lines around the grille and there is modified lower air intake. Door mirrors now featured LED indicators and the Saloon/Touring models having new-style tail lights with LED light strips.

The 5 Series Gran Turismo has been enhanced with a longer tailgate which increases the boot capacity by 60 litres to 500 litres.

BMW have ensured that all of the 5-series engines exceed EU6 emissions to meet the new the legislative requirements which come into affect September 2014 regarding exhaust outputs.

For example the 184hp 2.0-litre diesel engine in the 5 Series Saloon now has CO2 emissions of 119g/km for both manual and automatic transmissions, which matches the figures of the former EfficientDynamics model, which has now been discontinued. All diesel models now feature either a NOx Storage Catalyst or an SCR catalytic converter with urea injection, which allows them to meet EU6 emissions

On the petrol front all engines now meet the EU6 regulations. Including the new V8 4.4-litre twin-turbocharger which produces 449hp and 650Nm of torque, yet outputs 199g/km and on the official combined cycle is capable of 32.8 mpg. This engine features in the 550i Saloon, Touring and Gran Turismo models.