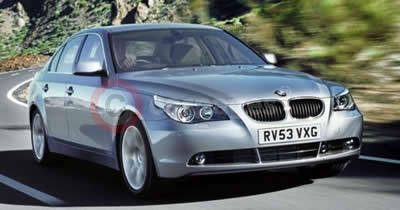 BMW Great Britain has announced a range of advanced new petrol engines for 5 Series models. The BMW 523i, 525i and 530i will go on sale in spring 2005 in SE and Sport variants, powered by three versions of the all-new magnesium-aluminium composite six-cylinder petrol engine recently launched to critical acclaim in the new BMW 630i. Both Saloon and Touring variants will be available.

BMW Great Britain’s Managing Director, Jim O’Donnell said: "BMW’s highly acclaimed diesel engines have overshadowed our continuing developments with petrol engines recently. VALVETRONIC has become a BMW standard for efficiency, economy and power delivery and our engineers have now taken the award winning six-cylinder petrol unit, added the VALVETRONIC system and new lightweight materials to produce a driver’s dream of an engine. Those who think that the three-litre diesel negates the need for a six-cylinder petrol had better think again."

Powered by a variant of the world’s lightest six-cylinder engine, the new BMW 523i with its all-new 174bhp 2,497cc engine replaces the existing 520i in the model line-up. The new powerplant, made extensively from lightweight materials such as magnesium and aluminium, and featuring VALVETRONIC technology for the first time on a six-cylinder petrol 5 Series, offers buyers the perfect balance of performance and frugality. Zero to 62mph takes 8.5 seconds (9.3 for the automatic), top speed is 146mph (144mph) and the combined fuel consumption figure is 33.2mpg (30.4mpg). Compared to the outgoing BMW 520i, torque has been increased by 20Nm (+9 per cent) and power is up 4bhp, but fuel consumption has also improved. Highlighting the flexibility of the new engine, 95 per cent of the engine’s maximum torque of 230Nm is available between 2,000rpm to 5,000rpm.

Boasting 258bhp (27bhp or 11.5 per cent more than the unit it replaces), the new BMW 530i is now the most powerful car of its kind in class. The 2,996cc powerplant has the same specification as the 630i Coupé and Convertible and will soon be used in the all-new BMW 3-Series. Torque is on a par with the previous 530i, but the characteristics of the new engine produce a flatter torque curve and more power low down for instantaneous response and smooth acceleration. Thus, peak torque of 300Nm is delivered between 2,500rpm and 4,000rpm. Thanks to its VALVETRONIC technology the engine can now also rev higher (7,000rpm) for greater breadth of performance. In reality, this equates to a zero to 62mph time of 6.5 seconds (6.7), a top speed of 155mph and a combined fuel consumption figure of 32.1mpg (30.4mpg).

All new models come with a six-speed manual gearbox as standard. A six-speed automatic with Steptronic is available as an option. Buyers of the new BMW 525i and 530i can also specify a Sequential Manual Gearbox.