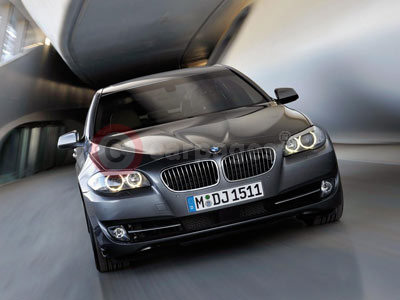 The new BMW 5 Series saloon and the new BMW 5 Series Touring have presented with the coveted iF award for outstanding product design. With this internationally acclaimed prize, the International Forum Design once again pays tribute to the characterful aesthetics of BMW Group Design. Following the 2011 Design Award of the Federal Republic of Germany and the 2010 red dot award, the iF label marks a further chapter in the success story of the new BMW 5 Series range.

Since it was inaugurated in 1953, the iF Product Design Award has been a trademark distinction bestowed on exceptional design. As an internationally recognised "seal of approval", the iF label honours outstanding design achievements and as such provides a platform for companies to submit their products for a professional assessment of their design quality by an international panel of experts. The 2011 award attracted a total of 2,756 products submitted by 1,121 participants from 43 countries, all vying for the prestigious prize. In the Transportation Design category, the BMW 5 Series saloon and BMW 5 Series Touring managed to sway the judges. This means that both models have qualified for the contest to win the iF Gold Award, which selects the 50 "best of the best".

The design of the new BMW 5 Series saloon skilfully translates the car's attributes into an authentic formal language. The sheer presence and elegance of its design express the saloon's premium quality and outstanding ride comfort, while its sporty driving characteristics are reflected in dynamic bodywork lines and the overall evocation of a distinctly athletic car. The superlative aesthetics of the new BMW 5 Series saloon are further borne out by its perfectly harmonious proportions and meticulously finished details.

The characteristic design features of the new BMW 5 Series Touring are its highly individual proportions and surface design - an individuality that creates a dynamic and powerful ambience. The long bonnet, short overhangs, longest wheelbase in its segment, elongated lines in side view and dynamically sloping roofline lend the new BMW 5 Series Touring an elegance that is unmatched among its rivals.

The unique quality of BMW Group Design has been consistently recognised in recent years by the iF Product Design Award. In 2010 the award went to the BMW F 800 R motorcycle, while in 2009 the BMW Group scooped up no fewer than eight awards. 2008 saw the BMW 3 Series Convertible and the BMW G 650 Xcountry motorcycle win over the judges, and in 2007 the BMW 3 Series Coupe received the iF Gold Award as one of the 50 best competition entrants. For the new BMW 5 Series saloon this is not the first award of the year: its outstanding design quality had already convinced the jury of the internationally renowned red dot awards as well as earning Germany's top accolade, the 2011 Design Award of the Federal Republic of Germany.