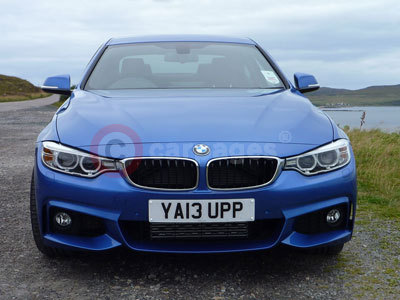 It's out with the old and in with the new at BMW as the Bavarian company unveiled the first model in its 4 Series line-up - the sleek and stylish Coupe.

As a natural replacement for the outgoing 3 Series Coupe, the newcomer is anything but a simple rebadging exercise and features ample character and personality of its own.

It has a bold new design with improved driving dynamics, increased efficiency and superior on-board technology. The 4 Series Coupe is 26mm longer with a 50mm wheelbase increase. It is 43mm wider, 16mm lower and boot capacity has been increased by five litres to 445 litres. These dimensions give the car an athletic yet bold and muscular stance.

Other eye-catching features include a flatter and lower positioned kidney grille, stronger shoulder lines, a smooth and fluent roofline and very flared wheel arches so if the car is viewed from behind they show up as the widest feature.

The driver-focused interior is spacious and richly equipped and the larger dimensions mean back seat passengers have an extra 12mm of legroom. BMW claims the additional equipment that comes as standard on the 4 Series adds up to at least a £1,000 saving compared to the 3 Series and that figure increases as you move up the model range.

The handling and driving dynamics can be altered via a drive control feature with a choice of ECO PRO, Comfort, Sport and Sport+ to select from. In addition, all models are supplied with automatic start/stop as standard.

The 4 Series will initially be available with a choice of three engines - the 2.0-litre 420d diesel, 2.0-litre 428i petrol and 3.0-litre twin turbo 435i petrol version. Three more engine options are expected before the end of the year.

Trim levels include the entry-level SE, Sport, Modern, Luxury and M Sport and BMW's xDrive all-wheel-drive system will be available later in the year on 420i, 420d and 435d models. This fully automatic system reacts to changes in traction in 0.1 seconds and will add a further £1,500 to the asking price.

Prices start from £31,575 for the 420d SE and rise to £41,435 for the 435i M Sport. However, a whole host of optional extras and packages can be added which bump up the asking price accordingly.

There is also a new Estoril Blue metallic paint colour specifically for the M Sport models.

We tested two models on twisting windy roads in the Scottish Highlands. The first was the very frugal 420d diesel model with SE specifications. This is the engine BMW anticipates will be the crowd-pleaser especially amongst business drivers. It features a 1995cc engine delivering 184bhp and six-speed manual transmission. Acceleration to 62mph is 7.5 seconds and the car tops out at 149mph.

According to BMW figures it can deliver carbon emissions of 124g/km which is significantly cleaner than the 3 Series and means a 29 per cent tax banding for business users. It has combined fuel economy of 60.1mpg although we only managed to see 55.9mpg.

This model was priced at £38,840 including just over £8k worth of optional extras.

The second model was the 435i petrol in M Sport model with six-speed manual gearbox. It has a 2979cc engine and delivers 306bhp. It can reach from 0-62mph in 5.4 seconds and has a top speed electronically limited to 155mph. This is the trim level that BMW believes will be in highest demand.

The M Sport has CO2 emissions of 185g/km which falls into the 29 per cent tax banding for business users. It has a combined fuel economy of 35.8mpg and we came pretty close to the official figure achieving 31.8mpg.

BMW 4 Series Images may not be UK specification cars. Colours and exterior and/or interior elements may differ from actual models.