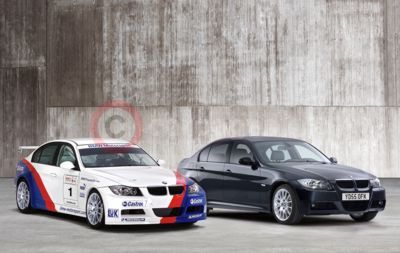 The world’s best Touring Car technology comes to the road

Designed to comply with FIA homologation regulations, only 500 BMW 320si’s are destined for the UK out of 2,600 cars worldwide. All feature a hand-built four-cylinder engine made at BMW’s engine plant at Hams Hall, near Coventry. The high revving 2.0-litre unit delivers 173hp at 7,000rpm (before reaching its red line at 7,300rpm) and 200Nm of torque at 4,250rpm.

This engine powers the BMW from zero to 62mph in 8.1 seconds and, if left unchecked, onto a top speed of 140mph. Although inspired by the racetrack, the car still delivers 31.7mpg on the combined cycle and conforms to the EU4 emissions regulations.

The limited production run of the BMW 320si starts in March 2006 and ends in September 2006, with first customer deliveries expected in April 2006. Retail pricing for the car is still to be confirmed, but expected to be approximately £24,975.

This high level of performance has been achieved using BMW’s motorsport technology. Compared with the ‘standard’ BMW 320i, the engine has been significantly modified with larger induction and exhaust valves to increase airflow. The cylinder bore has increased by 1mm to 85mm while the stroke has been reduced by 2mm to 88mm.

The compression ratio of the engine has also been increased from 10.5:1 to 11.0:1, helping to boost power by 23hp over the 320i. Additionally, instead of running with grey-cast-iron cylinder liners, the pistons run in special aluminium-alloy liners in the cylinder block. Engineers have also decided to remove BMW’s patented VALVETRONIC induction system, reverting to a conventional throttle due to the higher engine speeds demanded by a racing engine.

In a direct link with BMW’s motorsport programmes, the cylinder head is cast at BMW’s Landshut foundry alongside Formula One engine blocks. Additionally, to save approximately 10kgs of weight and lower the car’s centre of gravity, the cylinder head cover is made of carbon fibre.

All show and go

The new BMW 320si mates its high levels of performance with World Touring Car looks. The specification of the 320si is based on the 3 Series M Sport model that includes front and rear aerodynamic body styling, sports seats, sports suspension and aluminium interior trim. Additionally, the BMW 320si features Touring Car-style alloy wheels with BMW Motorsport motif. The front wheels are 8J x 18 fitted with 225/40 R18 tyres while at the rear the 8.5J x 18 wheels are fitted with 255/35 R18 tyres. Finally, mirror caps finished in satin chrome differentiate the car from a standard 3 Series.

The announcement of the 320si limited-edition homologation special coincides with BMW Team UK driver, Andy Priaulx, being crowned FIA World Touring Car Champion at the final round of the championship in Macau, China on 20 November.

Priaulx, the first British FIA World Champion since Damon Hill in 1996, scored a brace of second place finishes in his BMW 320si at the demanding street-based Guia Circuit, a result which not only landed the 2005 world title but also secured the coveted Manufacturers’ World Championship for BMW.

Priaulx was understandably overjoyed with the result and commented: "It’s really just a strange feeling at the moment. Macau is so special. To qualify on pole meant a lot but I felt that only 10 per cent of the work was done. After Race 1 was over and I learnt Dirk had finished tenth and Giovanardi did not finish, it looked good for me. The pressure was still there though. It was great during the race when I heard I was world champion and it has been fantastic ever since!"

Priaulx won the title with a total of 101 points, with Dirk Muller of BMW Team Deutschland in second with 86 points and Fabrizio Giovanardi driving an Alfa Romeo in third place with 81 points. Priaulx scooped top honours courtesy of consistent driving throughout the season, making it to the podium 11 times. BMW won the manufacturers’ title with a total of 273 points, 37 points more than second placed Alfa Romeo.

Touring cars - a history of success The new 2006 BMW 320si promises to be the latest in a long line of highly successful saloon-based Touring cars. The FIA World Touring Car title was Andy’s second championship win in a row after his success in the 2004 European Touring Car Championship, again in a BMW 320i.