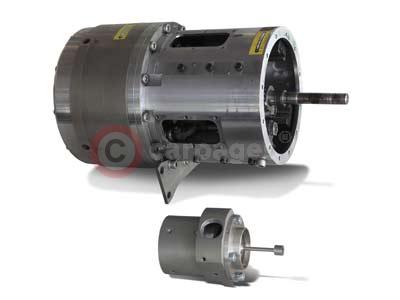 Even with the most efficient engines, up to 60 per cent of the generated energy is still lost, half to head exhaust heat, half being heat absorbed by the engine cooling system.

BMW EfficientDynamics is currently looking at ways of recovering this lost heat energy, with BMW being involved in several projects looking at different ways of utilising dissipated heat energy that are at different stages - research, pre-production and series development. Promising innovations include turbosteamer, thermoelectric generator, engine encapsulation and a waste heat exchanger for oil heating.

In December 2005, researchers proved that the turbosteamer technology is feasible with the first-generation turbosteamer unveiled, based on a maximalist approach, having designed a dual-cycle system. The primary element, a high-temperature circuit, employed a heat exchanger which recovered energy from the engine exhaust gases. This was then connected with a secondary circuit that collected heat from the engine cooling system and combined this heat with the high temperature heat from the primary circuit to create lower temperature heat. When laboratory tested on four cylinder petrol engines produced by BMW at the time, performance increases of 15% were seen.

Further development of the system for use in series production, attention was given to reducing the size of the components and making the system simpler to improve its dynamics and achieve an optimised cost-benefit ratio. As such, researchers focused on a component design with only one high temperature circuit.

All of the system components developed were configured to be integrated into vehicles, with a successful mockup system installed in the BMW 5 Saloon.

The thermoelectric generator directly converts heat into electricity. BMW Group engineers utilised a technology used by NASA in power space probes. The technology, known as the Seebeck Effect, says that if two thermo electric semiconductors have different temperatures, an electrical voltage can be generated between them. Due to the low efficiency of TEGS, the technology was assumed to not be suitable in automotive applications. Recent progress in the area of material research has seen discoveries which improve the performance of TEG modules.

Engineers first worked on integrating a thermoelectric generator into the exhaust system, with a system first being shown to public in 2008 which delivered a maximum 200 watts, a relatively low figure in power efficiency terms. Now, with the use of new materials and weight and size improvements, the latest generation of TEGs installed in the exhaust can generate 600 watts, with 1000 watts expected to be achieved shortly.

In 2009, BMW unveiled an alternative development in this project. Engineers integrated the TEG into the radiator of the exhaust gas recirculation system. This configuration allows for 250 watts to be generated, at the same time as reduced CO2 emissions and fuel consumption by 2%.

This energy system can also supply the engine or passenger compartment heating with additional warmth during cold starts. The thermoelectric generator is ideal to work alongside BMW EfficientDynamics Brake Energy Regeneration. While braking generates energy during deceleration and stopping, the TEG functions during acceleration. Researchers expect that TEGS will lead to reductions is fuel consumption of up to 5% in everyday driving conditions.