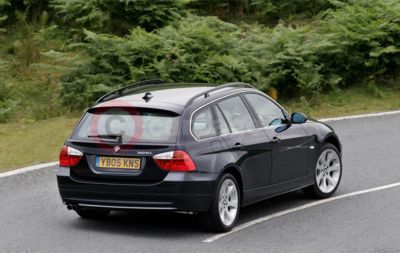 The fourth generation of BMW 3 Series Touring models (estates) go on sale in the UK from the 17th September 2005.

They will sell alongside the new 3 Series Saloon in the compact executive sector. Due to the rapid recent growth of estate car sales in this sector the launch of the Touring has leapfrogged the Coupe and Roadster models that in the past have traditionally followed their Saloon counterparts to market.

BMW (UK) Limited said this week that premium compact estate car sales will take around 17 per cent of the sector and demand will continue to grow in 2006. Hatchback sales in the sector are in decline and saloon sales are slowing but they are expected to account for about 45 per cent of all compact executive models sold, down from 50 per cent in 2001.

Sports activity vehicles also show growth potential in the sector and these could match Touring, or estate car, sales next year. The all-new BMW 3 Series Coupe and Roadster variants are now expected to be seen later in 2006.

In Europe, premium estate cars account for a consistent 30 per cent of segment sales and saloons around 40 per cent.

BMW expect to sell around 2,500 3 Series Touring models in the UK this year and a record 8,500 plus in 2006. The 320d is expected to account for 30 per cent of all sales and once launched, the 320i around 15 per cent. Diesel engined models will take 55 per cent of all 3 Series Touring UK sales. Fifty-five per cent of customers will be corporate buyers and 45 per cent retail. BMW UK customer profile figures also show that the majority of Touring owners are between 36 and 55 years of age with over half younger than 50, and 80 per cent of them are expected to be male. Around 17 per cent of owners are self-employed while over 60 per cent are company directors or managers. Golf, rugby and skiing are their favourite sports.

BMW say their key competitors in this sector are the Audi A4 Avant, Mercedes Benz C-Class Estate and the Jaguar X-Type Estate Review however conquest sales are expected from previous owners of small 4x4s, MPVs and larger saloons.

The front engine, rear wheel drive 3 Series Touring say BMW is faster, more fuel efficient and less expensive to own and run than the competitor models. With a longer floorpan rear seat legroom has been increased over the previous 3 Series Touring and the new Saloon. The longer load area offers 460 litres of space with the seats in place and 1,385 litres with the seats folded.

For the first six months of this year, BMW’s sales have shown an increase of six per cent over 2004 even though the UK market is down overall by six per cent. Once the July sales figures are announced BMW expect their sales to have increased by eight per cent with the UK market down 10 per cent.

Jim O’Donnell, Managing Director of BMW (UK) Ltd said, "The new Touring will contribute to what I hope will be another record year for BMW in the UK."