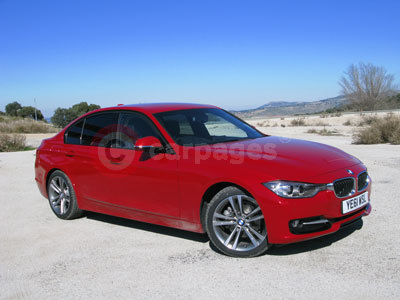 The launch of a new BMW on the motoring scene is always a significant event, not just for admirers of the Munich marque, but for anyone interested in cars. The debut of another ‘Ultimate driving machine’ is always guaranteed to cause a bit of a stir, and particularly when the model concerned is the latest incarnation of the iconic 3-Series.

The significance of the 3-Series is obvious from the numbers. Since 1975 more than 12 million of these cars have been bought around the world, accounting for one in five BMW cars sold. Here in Britain this model is so successful that it outsells Ford’s popular Mondeo.

Newly hatched and on sale in the UK from spring 2012, this one is the sixth generation of the BMW 3-Series. In keeping with the current trend, the new model is a little bigger all round than the car it replaces, and just like its predecessors it is destined to be the best-seller in BMW’s car range in this country. A predicted 21,000 new 3-Series saloons will be bought across Britain during 2012. The 320d is destined to be the most popular version, tax-friendly from a company car viewpoint and sought-after by ambitious young executives and well-heeled family drivers.

The 3-Series comes with a choice of 2.0 and 3.0 litre petrol and 2.0 litre diesel engines, and with six-speed manual or eight-speed automatic transmissions. On-the-road prices start from £25,730 for the entry-level diesel, the 316d SE, and from £25,860 for the most affordable petrol model, the 320i SE. The most expensive flagship version is the six-cylinder; twin-turbo petrol engined 335i Luxury Auto at £38,550 Performance

Much is expected of a BMW in terms of driving calibre, and this one certainly delivers. The quality of the experience behind the wheel is high class. It feels scrupulously engineered, and is the new benchmark for an executive model of its size. This two-litre diesel engine is not the most powerful unit in the range, but it packs a mighty punch with a power output of 181 bhp (184 PS) peaking at 4,000 rpm. The maximum torque of 280 lb ft is sustained from 1,750 to 2,750 rpm. The CO2 emission level is a respectable 120 g/km, putting the 320d in band C for the annual road tax. The 0-62 mph acceleration time is a rapid 7.5 seconds, and the car is capable of more than double the legal motorway speed limit.

With the six-speed manual gearbox the ratios are well-spaced and the calibre of the gear-change is excellent, you get a satisfyingly slick action with the squat little gearlever.