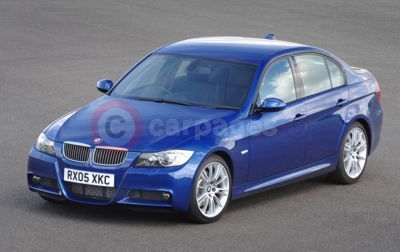 The new BMW 3 Series has won the 2005 Scottish Car of the Year award, presented by the Association of Scottish Motoring Writers (ASMW).

At the 8th ASMW awards dinner held on Friday night at the St Andrews Bay hotel, St Andrews, President of the ASMW, Ally Ballingall, hinted at the top prize for the UK’s benchmark executive car when he presented the 3 Series as Best Luxury/Executive Car: “More spacious than its predecessor, even better to drive and benefiting from a class-leading mix of petrol and diesel engine options, this is a car that lives up to the hype. Those looking for a compact executive saloon or estate will love this ultimate driving machine.”

On revealing the overall car of the year from the “seven exceptional category winners”, Ballingall stated: “Strong residual values make our winner an obvious choice among cash conscious Scottish private buyers while two talented diesel engine options make it a big hit with company car drivers. An astonishing machine to drive, look at and sit in, the ASMW’s ultimate motor from more than 50 new models launched in the past 12 months is..... The BMW 3 Series.”

The new BMW 3 Series Saloon was launched in March 2005 and, as with previous 3 Series derivatives, immediately made its impact felt at the showrooms. To date, more than 18,000 new 3 Series Saloons have found proud new owners in the UK, with take up for the new 3 Series Tourings being strong since it went on sale just over one month ago on 17 September.

On collecting the award, Craig Hepworth, BMW’s Regional Manager Sales and Marketing for Scotland, praised Scottish BMW dealers for their part in BMW’s sales success. “Scottish dealers have recorded growth of nearly 19 per cent to the end of September, with full year sales of BMW cars in Scotland predicted to be up over 16 per cent compared to 2004, itself a record. This growth is attributable both to the new BMW 1 Series and to the 2005 Scottish Car of the Year, the BMW 3 Series.”

The all-round qualities of the car, from superior driving dynamics, new levels of practicality and market-leading residual values and cost-of-ownership, were cited by the ASMW. But it isn’t just the Scottish motoring writers that have spotted the car’s attributes. The 3 Series is yet to get beaten in any major car magazine’s group test and it has also been short-listed for the European Car of the Year award, due to be announced in November.

But it was not the world’s journalists that were the first to spot the car’s great potential. Virtually a year ago to the day that the ASMW bestowed its top award on the car, BMW (UK)’s Managing Director, Jim O’Donnell, stated: “Once again, the new 3 Series sets a new benchmark for small executive cars and I am confident it will be a great success in both the corporate and retail markets.”

On hearing of the news of the Scottish writers’ award, O’Donnell backed up his 2004 prediction, saying: “BMW UK and our Scottish dealers are absolutely delighted that the Association of Scottish Motoring Writers has presented its 2005 car of the year award to the new BMW 3 Series. With the car now in its 30th year, the new model had a huge reputation to live up to and when expectations are so high, it can be a challenge to deliver. But that's a challenge that BMW's designers and engineers achieved.

“We're really proud of this car as it offers premium qualities all round, from both a driver's and accountant's perspective, and I'm pleased that both those facets appealed so strongly to the Scottish motoring writers,” he concluded.

The new BMW 3 Series Saloon is available in four-cylinder and six-cylinder petrol and diesel derivatives, with the four-cylinder 318i and 320i models powered by a state-of-the-art engine built at the BMW Group’s Hams Hall engine plant in the Midlands.