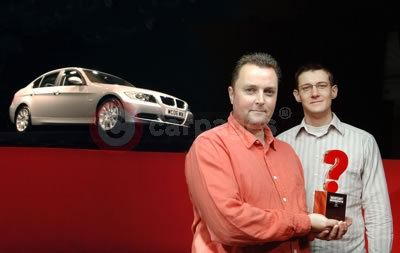 The award saw BMW taking top honours for the first time. The UK’s best-selling premium saloon car also took the night’s ‘Best Compact Executive’ category. The BMW 525i SE added to BMW’s roll of honour by being awarded ‘Best Executive’ car for the third year in a row. It was the 10th time in the last 11 years that the 5 Series has won its category.

The editorial team at What Car? were unanimous in their views of the new 3 Series. Group Editor at What Car?, Steve Fowler, commenting on the Car of the Year accolade said: “The BMW 3 Series emerged as a clear winner. We’d expected BMW’s Compact Exec contender to be good, but we didn’t expect it to be this good. No other car is as great in so many ways as the 3 Series.”

On its Compact Executive category win, David Motton, Editor of What Car? magazine, said: “BMW’s 3 Series is so good that it scored a comfortable victory. Crucially, the way that the Three steers, grips and handles is nothing short of outstanding.” He concluded “…As well as being the sharpest-driving car in this class, the 3 Series is also the most refined.”

At the awards, BMW UK Managing Director, Jim O’Donnell, said: “These awards are yet another testament to the quality and refinement of BMW cars. The new 3 Series is a truly outstanding car and I am very grateful to What Car? for this great honour. I am also very pleased that the 5 Series with its broad engine range, from two-litre diesel to the mighty M5, has continued its unprecedented success at these important awards.”

The What Car? Car of the Year award comes at the same time as BMW scooped a clutch of top honours at the Fleet Excellence Awards - the voting of which is drawn from the 30,000 plus readers of Fleet Week and Fleet Management. Proving that BMW offers products that appeal to the business user as well as private buyers, the 3 Series won the coveted ‘User Chooser Car of the Year’ overall prize. This was backed-up by category wins for the 3 Series, 5 Series and 3 Series Touring, as well as the X5 and Z4. BMW scored more category wins than any other manufacturer.

Tristan Young, Editor of Fleet Week, said of the winning car: “Available from under £20,000, the 3 Series range provides choice for any business and its drivers, offering seven different engines and four specification levels. A class-leading combination of fuel economy, emissions and performance irrespective of model, cements its appeal to the all important company car driver audience.”

The top honours granted to BMW by What Car? and Fleet News and Fleet Management come hot on the heels of a host of other awards presented to BMW. Since its launch in March 2005, both Auto Express and Test Drive magazines have also awarded the 3 Series their Best Compact Executive car of 2005. Last year culminated in the 3 Series being awarded the coveted Scottish Car of the Year award - the first time BMW had ever won the principal ‘gong’ north of the border.

The commendations come at a time of unparalleled sales success for BMW products, and the 3 and 5 Series models in particular. 2005 saw a record 111,666 new BMWs registered in the UK - a rise of nine per cent in an overall market that declined by five per cent. The new 3 Series made an impressive contribution to this total, despite only going on sale in late March. Meanwhile the 5 Series and X5 had record years in the UK, in their third and sixth years respectively.