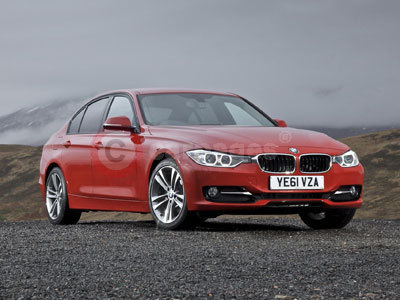 The sixth generation BMW 3-Series is due to go on sale this weekend in the UK, prices start at £28,080 for the launch model line-up.

There will be four engines available at the launch, with more to follow later in the year.

Available as an option will all engines - an eight-speed automatic gearbox will replace the former six-speed unit. Automatic versions of the new 3 Series Saloon are also now as fuel-efficient, or more so, than their manual equivalents.

The BMW 3-Series initially will be offer in ES, SE trims and, later in 2012, M Sport versions, but in a bid to offer greater choice Sport, Modern and Luxury models, will be introduced.

Dimensionally the BMW 3 Series Saloon has changed – it is 93mm longer than the previous model and 6mm narrower, excluding door mirrors. There is 18mm more feet entry freedom, 15mm more knee room and 8mm more headroom in the rear, while the height of the rear door and its opening angle have both been increased to make entry and exit easier. Boot space has been increased by 20 litres to 480 litres.