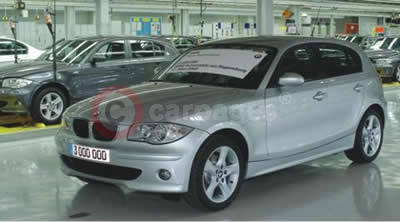 The BMW plant in Regensburg is celebrating a special milestone: exactly 18 years and four months after it went on stream, the 3 millionth vehicle came off the assembly line today, 17th March 2005. The milestone model is a BMW 120i.

The plant began production in 1986 with a workforce of 1,300 and a daily output in the region of 200 vehicles. Capacity was initially targeted at around 400 cars a day. On 5th October 1995, nine years on, the millionth car rolled off the assembly line. Output continued to rise in the years that followed. Today, a further nine and a half years later, the factory celebrates its 3 millionth vehicle.

The workforce of around 10,000 employed at the Regensburg plant today are currently achieving a daily output of more than 950 units of the BMW 1 Series and BMW 3 Series ranges (Saloon, Touring, Coupé and Convertible, as well as Individual and M models). Plant director Erhard Frank is clearly impressed by such exceptional figures: "The unique success of the factory is based on the high levels of competence and great flexibility of its associates, combined with modern manufacturing facilities and the strengths of the entire BMW production network."

A key factor behind the success of BMW Plant Regensburg was the introduction of flexible working time. By making work hours flexible at Regensburg, BMW was for the first time separating operating time from the individual working hours of the plant's employees. This meant that manufacturing time could be extended to 99 hours a week. The introduction in 2004 of a new variable working time formula gave a further significant boost to flexibility at the Regensburg plant. Thanks to this work time model, operating time can be ramped up to 140 hours a week if necessary.

Investment offensive from 2001: BMW 1 Series and 3 Series on one production line Having already invested around 1.83 billion euros in the Regensburg facility up to 1999, the BMW Group launched a further investment offensive in 2001 to the amount of some 500 million euros. This allowed manufacturing equipment to be modernised and the entire plant to be geared up for higher production runs and the flexibility required to produce all the variants of the new BMW 3 Series and BMW 1 Series. The special feature of the plant is that all the different model variants are processed along the same production line. This allows for an efficient and flexible response to market requirements worldwide.