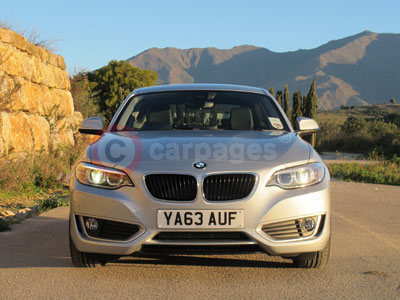 BMW's most successful model is the 1 Series saloon, ranked amongst the top ten best selling cars in Britain. This is its glamorous sibling, the 2-Series Coupe. Based on the saloon, but with a svelte two-door swept-back design, this is a car that prioritises style over practicality.

Let's talk numbers. BMW has done some in-filling. Now all the odd-number models 1, 3, 5 and 7 Series are badges for the sensible saloons and estates, while the even numbers - 2, 4 and 6 Series - are the coupes and convertibles. It is a realignment introduced for 2014. So the old 1 Series Coupe, that first appeared in 2007, has disappeared and its successor is rebadged as a 2 Series.

The 2-Series Coupe arrives on the scene just as BMW is riding a wave-crest of surging sales. In 2013 some 135,000 BMWs were bought by British motorists, which was a record for the German brand. The range is undergoing major refurbishment, with 10 new or updated models in 2013, and a similar number arriving during 2014.

This 220d is a decently quick car, with a top speed capability of more than double the UK limit and 0-62 acceleration in a little over seven seconds from this two-litre, 181 bhp diesel-engined version. On the road it feels fleet-footed and a good long-distance mile-muncher. The peak power comes at 4,000 rpm and the maximum torque figure is 280 lb ft, sustained over a 1,000 rpm band on the rev counter, from 2,750 to 3,750 rpm.

The car has a slick gear action and feels precision-engineered and enjoyable to drive. Steering feel is meaty and general well weighted, with sufficient power assistance around town but not overly light at speed. The overall feel of the car is more grand tourer than sports car, but it is good behind the wheel with the engaging feel of a rear-wheel-drive model.

This is a 7-year+ news article, from our BMW archive, which dates back to the year 2000.

If in doubt check with your local BMW dealer as car prices and technical data will have changed since 2014.

BMW 2 Series Images may not be UK specification cars. Colours and exterior and/or interior elements may differ from actual models.