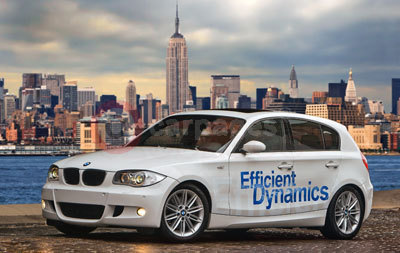 BMW’s award-winning EfficientDynamics programme has been honoured with a global brand. A jury consisting of 47 motor journalists from 24 countries has awarded the BMW 118d, a model that displays all facets of EfficientDynamics, with the “World Green Car of the Year” at the New York International Auto Show 2008.

Judges of the World Car of the Year Awards praised BMW and its 118d for offering buyers a model with a range of innovative technologies that reduce fuel consumption and cut CO2 emissions as standard. The three- and five-door BMW 118d record an impressive 62.8mpg on the combined cycle with CO2 emissions of just 119g/km – putting it into the Band B category for Vehicle Excise Duty. The BMW 118d now costs just £35 a year to tax.

To help it achieve these impressive figures, EfficientDynamics technologies such as Brake Energy Regeneration, Auto Start-Stop and Electric Power Steering are employed to cut fuel bills and emissions. An optimum gearshift change indicator is included to encourage economical motoring.

Tom Purves, Chairman and CEO of BMW of North America, said: “BMW is very excited that the BMW 118d with EfficientDynamics won the World Green Car title. The measures that we’ve implemented within our EfficientDynamics strategy into every BMW mean that we’re able to provide customers with the driving pleasure they expect from a BMW, while still meeting the stringent requirements for fuel-efficiency and low emissions.”

The award has cemented BMW as the world’s leading producer of environmentally friendly premium cars and comes swiftly after BMW received recognition for EfficientDynamics by winning similar ‘green’ awards in the UK and abroad. What Car? and CAR magazine ‘Green Awards’ and the Fleet News Environmental Award were presented in the UK. A host of other European publications and organisations, including the coveted Auto 1 Innovation Award presented during the Geneva Motor Show, have also been bestowed on BMW.

Judges of the World Car awards previously presented BMW with the World Car of the Year honour for the 3 Series model range in 2006. This time the BMW 118d was chosen ahead of 10 other environmentally friendly production vehicles for the World Green Car of the Year. The Mercedes Benz Smart fortwo cdi and the Volkswagen Passat 1.9 TDI were the two other top three contenders.