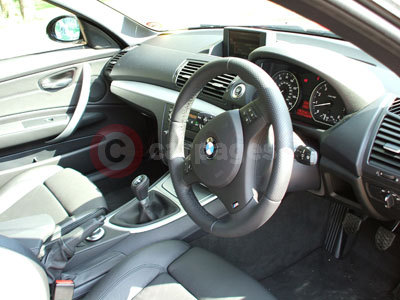 The other, second generation, diesel is the 120d and, like its slighter smaller counterpart, comes with the EfficientDynamics features, an optimum gear-shift indicator, low rolling resistance tyres and a Diesel Particulate Filter.

The 118i and 120i are new four-cylinder, petrol engines, featuring BI-VANOS technology. The odd one out is the 130i, which BMW tells us, is the lightest, 6-cylinder, production engine in the world. It features VALVETRONIC and BI-VANOS technologies, which helps to propel the 3-door car from 0-62mph in 6.0 seconds (6.1s for the 5-dr) and the top speed is electronically limited to 155mpg.

The straight-six outputs 265bhp at 6,650rpm and peak torque of 315Nm is available at 2,750rpm but seems to be ever-present and ever-ready, even in top gear. A six-speed manual transmission is the standard fitting throughout the range however, a 6-speed automatic ‘box with Steptronic, sequential shift is available, and the 130i driver has the added benefit of steering wheel-mounted paddles.

At one end of the 1-Series economy scale, we have the 118d and at the other, the 130i M Sport, with fuel consumption figures of 23.2-, 47.1- and 34.0mpg for the urban, extra-urban and combined, respectively, while the twin tailpipes emit 197g/km CO2. The figures are reasonable for such a sporty car and the combined figure isn’t that far adrift from reality; my average for the week was 29.1mpg, and that was without trying.

BMW make much of its theory that the front wheels are for steering and the rear wheels are there to be driven and never the twain shall meet. It has served the company well so far and the 1-Series is no different. It has perfect poise with an almost perfect 50:50 weight distribution adding to the inherent stability that comes with a wide track and a fairly long wheelbase.

The ride is quite firm but not to the point of being uncomfortable and generally, the 1-series has a solid, dependable feel to it that inspires confidence and confident driving doesn’t go unrewarded.

A standard feature of the range is the Dynamic Stability Control (DSC), which comprises ABS with EBD, Automatic Stability Control (ASC) Cornering Brake Control (CBC) and Dynamic Traction Control or DTC. Too much technology to spoil the fun? A press of the DSC button brings in the Dynamic Traction Control, which permits a degree of wheel slip. And that not only allows for a bit of fun during boisterous driving but also means that on slippery surfaces, the car has a degree of forward motion before the DSC takes over.

For the 130i, it is a little more involved and DSC+ also has Brake Drying, Brake Pre-tensioning, Soft stop, Hill Start Assistant and Brake Fade Compensation. In short, the 130i offer something for the senses and the sensibilities.

Apart from the upgraded engines, the 1-Series has undergone some cosmetic changes, too. The famous kidney grille is larger than before for improved air-flow to the engine, there is a larger air intake created by the revamped lower front spoiler, which now has a sportier look.

The rear sees a re-styled bumper, which is designed to make the car look lower and wider; an impression that is emphasised by the new rear light clusters.