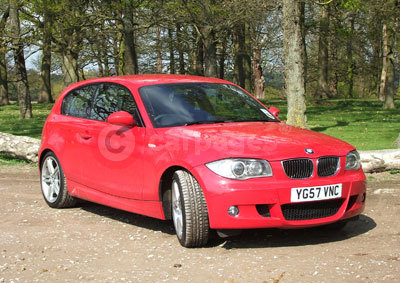 When it was launched in 2004, the 1-Series was something of a departure from the norm. BMW cars up to that point had a reputation for sleekness of style and represented power in all its connotations. A small hatch from BMW!? Would it be like the MINI, which the company had launched a couple of years earlier?

The expectations were high and, when it came to it, we were not disappointed. Moreover, it is nothing like the MINI. The first 1-Series was said to have been unique in that it had a front engined, rear wheel drive set up. This has remained the case for the second generation models, the 5-door version of which went on sale in March 2007, closely followed by the 3-door, in May.

BMW have introduced a good few technical improvements for the new 1-Series. These come under the banner of the EfficientDynamics programme and have improved emissions by up to 21 per cent, fuel economy by up to 24 per cent, at the same time, increasing the various engine outputs by up to 20hp.

One of the components of the EfficientDynamics programme is Brake Energy Regeneration or iGR. Although used in the latest generation of MINI, this is the first time it has made an appearance in the 1-Series. An intelligent Alternator Control (IAC) reduces the drain on the engine by ‘kicking in’ only when required to charge the battery, instead of constantly drawing power from the engine, which is more common. As well as the part-time IAC, the energy usually lost on over-run, when braking or going downhill, is gathered up and fed back into the battery. The result is an instant three per cent improvement in fuel economy.

Again, as in the MINI, all manual models, save the 116i (5-door only) and the 130i, come with automatic Start-Stop, which switches the engine off when the car is stationary, at traffic lights, for instance and automatically fires up again when the clutch is pressed.

Surprisingly, the use of Electric Power Steering saves some 90 per cent of the energy used by the more conventional, mechanical-hydraulic systems, by only working when needed and the EPS system is much lighter. This on-demand ethos applies to other components, too, such as the air-conditioning, which disconnects itself from the drivetrain when not in use. Another clever improvement is on the SE trimmed cars; there are flaps behind the grille, which when closed, improve the aerodynamics and also offer better cold-start times by retaining heat within the engine bay.

While the 5-door version of the 1-Series comes with a choice of six engines, the 3-door has five; the 116i is missing from the line-up. Of the diesels, the 118d is said to have the lowest emissions of any mainstream BMW car at 123g/km. It is also the Company’s most economical car with a combined figure of 60.1mpg - only a smidgeon short of the Golf Blue Motion but it is better looking.