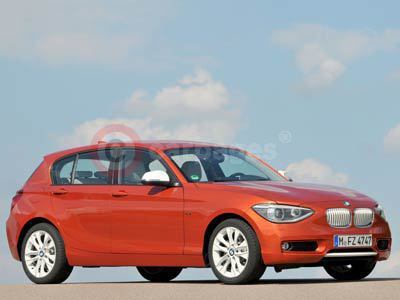 In a beauty contest for cars, the first generation BMW 1-Series would be unlikely to win any prizes. Its somewhat ungainly styling was rather tail-dominant and has been likened to a gangly puppy sitting on its haunches. It was the prized propeller badge on the car’s nose, and its status as the smallest and most affordable model in the BMW range, that ensured its success in the years since its 2004 launch. Seven years on, the second generation 1-Series has been given an extensive re-style that morphs an ugly duckling of a car into rather more of a swan.

The baby BMW has grown up just a touch, gaining 85 mm in overall length, with a slightly longer wheelbase and wider track than the original model. The added space benefits back seat room and has helped to give the car more balanced proportions. With these changes the 1-Series has also been given a stronger structure, but overall weight has been reduced by around 30 kg.

The 1-Series has the distinction of being the only rear-wheel-drive model among cars of a similar size, giving it a certain cachet amongst drivers attracted by its different driving dynamics from the mainstream of front-wheel-drive rivals. Whether it entirely lives up to those expectations is debatable.

The choice of engines includes two new generation four-cylinder petrol engines and three mildly revised four-cylinder diesels. All the engines come equipped with automatic shut-off to save fuel wastage in urban driving and traffic jams. The diesels are all turbocharged two-litre, common-rail units with differing power outputs. The petrol engines range in power from 135 to 168 bhp, and the diesels deliver from 115 to 181 bhp. Transmissions available are a six-speed manual or eight-speed auto, the latter with up- and down-shift paddles on the steering column.

The mid-range diesel 118d is expected to be the most popular model in the range, with power peaking at 141 bhp. Its 0-62 mph acceleration time is under nine seconds and the quoted top speed is 132 mph, but fuel economy is a pretty reasonable 62.8 mpg on the combined cycle. CO2 outputs are from 129 to 137 g/km for the petrol models, and from 114 to 122 g/km for the diesels.

The model tested here is the most powerful of the diesels, the 181 bhp 120d, which was the only one available to drive at launch. It is pleasantly surprising that a car with this power output and performance, and equipped with an automatic gearbox, ducks below the 120 g/km emissions barrier to qualify for a free first-year tax disc and £30-a-year subsequent discs.

It is worth noting that the car has a decent towing capability, good for 1,200 kg braked towing weight.