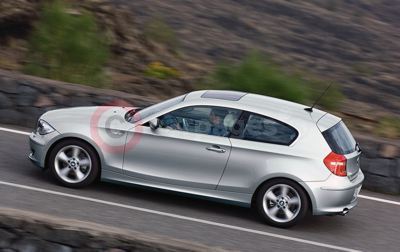 Four-cylinder engine with Bi-VANOS achieves zero to 62mph in 10.9 seconds and a top speed of 124mph. Output is 116hp and peak torque is 150Nm. Combined fuel consumption is 37.7mpg and CO2 emissions are 179g/km.

The plethora of new technology showcased in the BMW 1 Series will have a significant impact on cost of ownership for customers. For the company car driver all but two engine variants now sit in the Band C category for Vehicle Excise Duty. This results in a saving of up to £505 for someone paying 40 per cent tax and up to £278 for those in the 22 per cent tax bracket. For all owners fuel consumption improvement means a 12,000 miles-a-year driver will save approximately £250 off the fuel bill.

All BMW 1 Series models come with Dynamic Stability Control with Dynamic Traction Control for the best combination driving pleasure and safety. DSC allows drivers to make the most of the 1 Series’ 50:50 weight distribution and rear-wheel drive configuration for the best on-road performance. The BMW 130i comes with five additional functions with its DSC+ system for enhanced convenience and driver safety: Hill Start Assistant, Brake Pre-tensioning, Brake Drying, Brake Fade Compensation and Soft Stop.

All BMW 1 Series have six airbags as standard, the Brake Force Display function on the rear lights to highlight sharp braking and Run-flat tyres with Tyre Puncture Warning System.

A New Style Of BMW 1 Series To herald the introduction of the latest generation of engines, BMW’s designers have refreshed the interior and exterior styling of the five-door model. The 1 Series now features a larger kidney grille for improved airflow to the engine. The lower front spoiler has also been reprofiled to create a larger air intake, while the spoiler protrudes further for a more pronounced, sporting look. The headlamp cluster remains the same size but a darker cover gives a subtle, more distinguished front end.

At the rear a restyled bumper gives the impression of a wider, lower car. The rear lamp cluster now features a new arrangement of lights, but retains its original shape.

The new three-door 1 Series features the same styling cues but its side view is naturally different. The passenger doors are longer than those on the five-door model and are also frameless in the style of a coupé. Inside, customers will also be able to choose between either a four-seat or a five-seat configuration. In the four-seat arrangement rear passengers are separated by a central storage compartment and sit in more sculptured seats. As a no-cost option the five-seat layout offers the traditional bench seat standard on the five-door 1 Series. The introduction of higher quality materials and minor changes to the layout of the interior enhance customer comfort and practicality.

The new 1 Series comes with MP3 and USB stick capability for the best in in-car entertainment. Customers with their favourite music loaded on an Apple iPod or a USB stick can now plug these into the car to continue their listening. Tracks are selected via steering wheel controls or the iDrive system.

The optional Adaptive Headlights that turn to follow the intended course of the car have been improved on the 1 Series. Cornering light function is added to the package as standard. This means two additional lights turn at speeds of between 22 and 40mph to further illuminate the direction of travel on a twisting road.

Since its launch in September 2004, the BMW 1 Series has proved a popular choice in the UK with 51,492 sold to date and in excess of 200,000 worldwide. The new three- and five-door BMW 1 Series models will be on display at the Geneva Motor Show in March and go on sale in the UK at the same time.