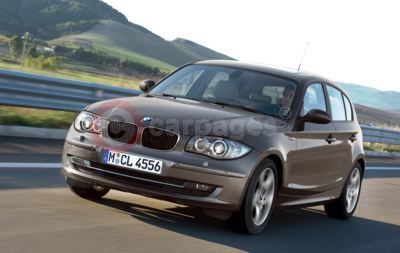 The new BMW 1 Series goes on sale in spring 2007 and features a model line up that includes the most fuel efficient production vehicle BMW has ever produced. The introduction of a three-door model and a revised five-door come as a raft of new fuel-saving innovations are rolled out across the range.

Technologies such as Brake Energy Regeneration, Automatic Start-Stop function and Electric Power Steering are combined with lower rolling resistant tyres and a gearshift change indicator to encourage economical motoring. These innovations are in addition to the use of variable valve technologies and High-Precision Direct Injection engines on some 1 Series models that boost power output but cut fuel consumption and emissions.

The BMW 118d, BMW’s most economical car, manages its record 60.1mpg figure courtesy of these features in conjunction with the use of further lightweight engineering. The car now has an aluminium crankcase to save weight. Aside from the BMW Hydrogen 7, the BMW 118d also posts the lowest ever CO2 emissions of any BMW recording 123g/km (putting it into the Band C category for Vehicle Excise Duty).

Other engines in the new 1 Series range record economy improvements of up to 24 per cent compared to the previous model, while emissions have also been cut by up to 21 per cent. These improvements have not been to the detriment of driving pleasure. The new 1 Series is powered by a range of engines whose outputs have increased by up to 20hp with a consequential improvement in performance figures.

Brake Energy Regeneration (iGR) makes its debut on the 1 Series. The system uses an Intelligent Alternator Control (IAC) and an Absorbent Glass Mat battery to recycle previously lost energy, in turn saving fuel. This is achieved as the IAC reduces drag on the engine by only engaging when required to charge the battery, whereas a traditional alternator is always pulling power from the engine. Additionally, the energy generated by the engine on over-run (under braking or descending a hill) was previously wasted. Now this lost energy is utilised by the IAC to charge the battery. iGR alone is responsible for a three per cent improvement in fuel economy.

The new 1 Series comes with Automatic Start-Stop function to cut fuel consumption. Standard on all manual transmission models (except 130i), the system automatically switches the engine off when the vehicle is stationary and the driver puts the car into neutral. To restart the driver only need engage the clutch again before pulling away in the normal manner. Should he not want to use the Automatic Start-Stop function it can be manually switched off.

The use of Electric Power Steering results in a 90 per cent energy saving compared to a conventional mechanical hydraulic steering system. Power assistance is now provided by an electric motor that works only when required, such as turning a corner. Other fuel saving enhancements have been made courtesy of various ancillary devices, such as the air-conditioning power supply being disconnected from the drivetrain when not in use. Even flaps behind the kidney grille improve economy, closing up for improved aerodynamic efficiency should the engine require less airflow. The feature also improves cold starting times.

Engine Changes And Statistics In Detail 130i

World’s lightest six-cylinder production engine with VALVETRONIC and Bi-VANOS technology achieves zero to 62mph in 6.0 seconds (five-door is 6.1 seconds) and an electronically limited top speed of 155mph. Output is 265bhp while peak torque is 315Nm. Combined fuel consumption is 34.0mpg and CO2 emissions are 197g/km.