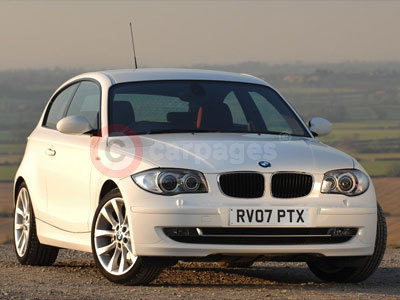 Five years of production, four body variants and one million times Sheer Driving Pleasure in the compact class. The BMW 1 Series has already reached a seven-digit production volume in its first model generation, clearly confirming its status as a genuine best seller in the international car market.

Accounting for one million units sold since its debut in 2004, the BMW 1 Series is also one of the driving forces for the outstanding success of the world's leading manufacturer of premium cars.

The anniversary model was delivered to its proud owner on Monday, 12th April 2010, on the occasion of the Leipzig Motor Show, the Auto Mobil International (AMI). The car, a three-door BMW 118d built at BMW Plant Leipzig, was handed over jointly by Frank-Peter Arndt, Member of the Board of BMW AG for Production, and Stanislaw Tillich, the Prime Minister of the Free State of Saxony, to a customer from Leipzig.

As yet a further essential feature, the BMW 1 Series is available with Active Steering varying not only steering assistance, but also the steering angle as a function of speed.

Germany's leading premium manufacturer also proves the unique position of the BMW 1 Series versus its competitors through new concepts and philosophies in communication. Young, fresh, unconventional - this is how BMW's highly successful compact model has been presented from the start. Highlights unforgotten to this day are the launch campaign starring Kermit, the frog from the Muppets Show, sitting at the wheel, or the highly dynamic launch campaign introducing the BMW 1 Series in the USA, where at an imaginary place in Bavaria the BMW 1 Series is to be 'shot' straight to the USA on a gigantic ramp. And last but certainly not least in this context, the launch campaign for the BMW 1 Series Coupe was lauded as the best advertising by Auto Trophy, the German car magazine, under the title "Condensed Intensity.