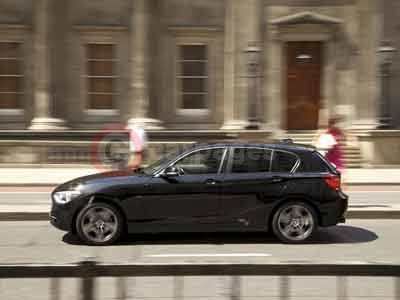 From launch, the second generation BMW 1 Series will be available with the choice of two new generation, four-cylinder petrol engines and three redesigned four-cylinder diesel units.

The new BMW 116i, with the four cylinder TwinPower engine provides 136hp at 4400rpm with maximum torque of 220Nm between 1350 and 4300rpm. From standstill, 62mph is reached in 8.5 seconds taking the car on to a maximum speed of 130mph. Fuel consumption on the combined cycle is 49.6mpg and 132g/km CO2 emissions, which rise to 134g/km with the eight-speed automatic transmissions.

Modifications have been made to the 2.0 litre diesel engine for the new BMW 1 Series, including aluminium crankcases, reduced engine friction, thermodynamically optimised turbochargers with variable turbine geometry and next generation common rail injection.

The new BMW 1 Series is available with a six speed manual transmissions or a new eight speed automatic transmission. For the automatic, a Sport configuration can be specified which features more dynamic gear changes and gearshift paddles on the steering wheel.