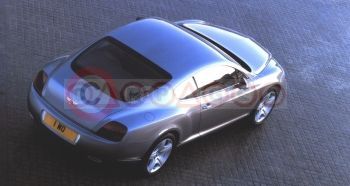 Bentley Motors is delighted to unveil the production version of its new Continental GT as it makes its world debut at the Geneva Motor Show. Seen hitherto only as a design concept, the Continental GT now appears in its final form, ready for delivery to customers from the fourth quarter of this year. It is truly a landmark car: it is the first all-new and unique Bentley design for 70 years and the first to be designed, engineered and manufactured for Bentley Motors alone since the fabled 8-litre of 1930.

Conceived to be a sporting coupé without rival, the Continental GT is not just the fastest production Bentley in the 84-year history of the company, it is also the fastest genuine four seat coupé in the world. It combines all elements of the finest British Grand Touring traditions and Bentley craftsmanship with some of the most advanced technologies ever brought to the automotive market.

Featuring a 6-litre, 12 cylinder, twin-turbocharged, engine with 560PS (411kW) driving all four wheels through a paddle-operated, six speed automatic gearbox, the Continental GT offers true supercar performance combined with the interior space, versatility and ease of ownership to make it not merely viable as an everyday car, but a natural for the role. In this respect as well as many others, Bentley believes the Continental GT to be unique.

The Continental GT has been designed and engineered by Bentley at Crewe and will be manufactured there in all-new facilities combining state of the art technologies with the unique hand finishing and attention to detail that have been the hallmark of all cars to wear the winged ‘B’. It brings the prospect of Bentley ownership to a wider audience of discerning enthusiasts than ever before. And while the Continental GT is a Bentley from bumper to bumper, the role of the company’s Volkswagen parent has been a critical component in its realisation.

The dream of building a new Bentley coupé is not new – indeed it has been alive at Crewe for over 20 years. But it was only the £500 million vote of confidence placed in the marque by Volkswagen that brought the dream to reality. It has enabled Bentley to transform the Crewe factory into a thoroughly modern centre of manufacturing excellence, ensuring not only that Bentley is in better shape today than ever, but also guaranteeing its design, engineering and manufacturing sovereignty as far into the future as it is possible to see. Highlights