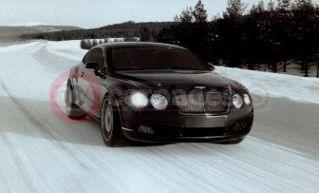 Crewe, 11th June, 2002…. Bentley Motors is proud to announce the first technical details of its new GT coupé. From the start the driving philosophy behind the as yet unnamed coupé has been to produce a car with true supercar performance in a package so effective that owners who used it every day would find a car with a complete range of answers to the questions posed by daily life on the road. Unlike typical supercars it would be refined, comfortable and seat four people; unlike other large coupés, it would also be utterly thrilling to drive.

Now some of the weapons used to achieve these diverse aims can be revealed. Under the bonnet lives a 6-litre, twin-turbocharged W12 formation Bentley engine with a power output in excess of 500bhp. But power is nothing without the torque to back it up and while the exact torque peak of the new engine must remain a secret for now it will come as no surprise to those familiar with the Bentley approach to power delivery that it will be more than adequate for the job.

Though the engine is derived from the similarly configured powerplant used elsewhere in the Volkswagen group, it was designed and developed by Bentley. Moreover, like the rest of the car, this Bentley powerplant will be built at Crewe.

Despite the fact that this engine will be one of the most powerful of any standard production car, it will nevertheless still be relatively understressed in this application, and while outright performance will be unlike that of any Bentley past or present, the manner in which it is delivered will be inimitably Bentley. It is fair to expect the GT coupé to reach 60mph from rest in under five seconds and reach a maximum speed somewhat in excess of 180mph.

Its power will be fed through a new, paddle operated six speed automatic gearbox and will be delivered to the road via all-wheel drive - a first in Bentley’s history. All-wheel drive for an engine of this output was considered essential not simply for its proven active safety, but also to enhance its everyday usability everywhere from a rain-washed London orbital motorway to ski resorts all over the world. Naturally an Electronic Stability Control system will also be fitted.

Making sure the GT coupé handles as well as it goes is a state of the art suspension system featuring a multi-link rear axle, double wishbones at the front and the latest in electronic damping. Bentley’s chassis engineers know that merely making a car fast does not make it involving to drive and they have been briefed to make the GT coupé not only supremely safe and comfortable but also to offer outrageous amounts of fun to an appreciative driver on the right road.

Full details of the interior package of the GT coupé will be released nearer its launch date but for now it can be said that the cabin fully reflects the marque’s values and its on-going dedication to the use of the finest woods, hide and handcraftsmanship. The seating arrangement would once best have been described as ‘two plus two’ but that phrase now appears to describe cars with little more than a shelf behind the front seats. Suffice to say for now that the GT coupé is capable of seating four and, critically, having more than enough stowage space to carry their luggage too.

The GT coupé project continues apace. With the final design signed off, work is now concentrated on evaluation and durability testing in some of the most inhospitable regions on the planet. From the frozen wastes of the Arctic Circle to the life-threatening heat of the hottest deserts on earth, GT coupés are being subjected to challenges they could never conceivably face in a customer’s hand. The result will be one of the quickest, most thoroughly developed and advanced cars ever offered for sale to the general public by a car manufacturer.