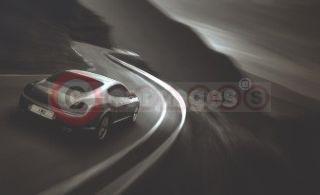 Crewe, August 17th 2002 ….The brief issued to those who would define the package of the new Bentley GT coupé was one of the most challenging of the entire project.

It is true that today some dedicated supercars are capable of producing performance similar to that of the GT coupé; likewise there is a small number of large coupés capable of carrying four people in comfort. The design specification for the GT coupé was that it must not only house the hardware safely to realise 180mph plus performance – including a 6-litre, twin-turbocharged, 12-cylinder engine – but that it must also carry four people. The design specification of the GT coupé allowed that a family of four and their luggage should be able to cross a continent in comfort, style and luxury.

Of course, it could have been achieved through the simple expedient of making the GT coupé bigger. But the team at Crewe was determined to ensure the car stayed compact, agile and fully capable of delivering on its promise to the driver.

Providing more than adequate space in the rear was an imperative design hard point of the GT coupé. In recent years many effectively two seat sportscars have been brought to market with tiny hollowed out shells behind the front seats, allowing their makers to describe the car as a ‘two plus two’. When Bentley refers to the GT coupé as a two plus two, it uses the phrase in its original context which implies a car capable of carrying two adults and two children in comfort for unlimited distances.

Surprisingly, the first big challenge for the designers of the GT coupé concerned neither passenger nor luggage space. It concerned the installation of its 6-litre, twin-turbo Bentley engine, its all-wheel drive hardware and a new six speed automatic transmission. This job was made especially difficult by the prerequisite that one of the key Bentley styling cues, a very short front overhang, was retained.

Once the problem of creating an effective crash structure in the small area in front of the front wheels had been solved, attention turned to the engine and gearbox. Firstly, the new transmission was modified by moving the differential forward, which allowed the drive shafts to be as far forward as possible, thus enabling the wheels to be close to the front of the car.

The second requirement was to package not only a large displacement engine, but also its turbochargers, and to create enough space around the whole for it to operate efficiently, and keep under-bonnet temperatures low.

Casting the engine block in a ‘W’ rather than a ‘V’ formation has made the engine much more space efficient than a conventional twelve cylinder motor of similar capacity. The configuration is best understood as two very narrow angle (15deg) V6 engines joined on a common crankshaft. So because the cylinders of each bank are staggered rather than in line, the result is an engine that’s shorter and easier to package. And, as we shall see, this not only helped with the packaging of the engine bay, it also liberated more room in the passenger area too.

Turning to the cabin, the next challenge for Bentley’s packaging experts was to achieve a low, rakish roofline and still provide a new level of comfort and space for such a car. The opposing interests of space and sportiness were resolved by simple, clear thought and an idea borrowed, of all things, from off-road vehicles.

Off-roaders may have many on-road limitations, but there is much to be learned from the driving position of the best of them. Jim Shaw, head of packaging for the GT coupé, explains: "Ask most people what they like most about their off-roaders and they’ll talk about the elevated driving position. However if you apply science to what they are saying it becomes clear that a relatively upright seating position places your lower limbs in harmony. Drive a car a very long way, as we intend this car to be driven, and you’ll find the full benefits of comfort and relaxation that have been achieved through this seating concept."

But finding the correct basic seat position for those in the front was only the start. Mindful of the fact that drivers do not all come in the same convenient size, Bentley’s packaging team resolved to ensure that the GT coupé fitted a wider range of potential Bentley customers than any other coupé in its history. And job one in this quest was to travel to New York and measure some professional basketball players. This led to exhaustive adjustment and extension of the seat runners until the car was capable of accommodating people for whom supercars could hitherto not even be considered.

Perhaps just as importantly, typical Bentley aficionados will also discover that for all the change the GT coupé has brought, some things remain the same. This may be a 21st century car but it would not be a Bentley unless the cabin had been appointed in wood and leather using skills handed down from generation to generation at Crewe. Using the finest veneers and hides, Bentley’s craftsmen have created a cabin ambience that marries modern design and traditional materials with rare harmony.

Where appropriate, state of the art manufacturing techniques have been used to create a thoroughly modern feel – and you’ll notice it most in the extraordinary curves and shapes the team has been able to fashion from wood – but the labour-intensive hand finishing that’s a hallmark of all Bentley cars is as crucial to the GT coupé as any to have been built at Crewe.

Because touring requires comfort and space for occupants and commensurate space in the boot, Bentley applied similarly exacting standards to luggage stowage. The first decision to be made was to site the fuel tank in the floor of the car and not, as convention dictates in this class, between the rear seat and the boot. This was not an easy task, given the tank’s 90-litre capacity, but it was worth it for not only does this allow an exceptional 355-litre boot volume, but also it permits a through-loading facility. For GT coupé customers, particularly those looking to take advantage of its all-wheel drive traction on winter sports holidays, this facility has vast appeal in allowing two sets of skis as well as two snowboards to be carried and renders redundant unsightly and unsecure roof-racks.

Those looking to house more conventional loads will find space for two large and one medium suitcase – more than enough to cope with a fortnight’s holiday – while golf fans will find room for two full sized golf bags with still enough room left over for a suitcase.

"The Bentley GT coupé design brief posed questions that I had hitherto never encountered," said Bentley Motors concepts and packaging manager Jim Shaw. "Just how do you fit a 6-litre, twin-turbo engine complete with four-wheel drive system into a car capable of carrying four people and their luggage in comfort, whilst retaining all the classic Bentley styling cues? I believe we have more than succeeded, exceeding even our own expectations, and that we have created the only bona fide supercar capable of being enjoyed by more than two people at any one time."