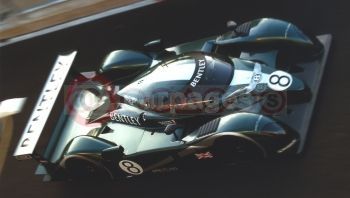 Team Bentley is delighted to confirm the details of its 2003 racing programme, a year that will bring not only the best chance yet of outright victory at Le Mans 24-hours, but also its debut in the Sebring 12-hours, an event shorter in duration but, if anything, even tougher on machinery than Le Mans.

Both events will be contested by two new Bentley Speed 8 prototypes which have been redesigned from the ground up for 2003. The first car will be crewed by Tom Kristensen, Rinaldo ‘Dindo’ Capello and Guy Smith, the second by Johnny Herbert, Mark Blundell and David Brabham.

The focus, not only for this season, but for the last three seasons is and has been this year’s Le Mans. When, in 2000, Bentley announced it was returning to the track it was with a clear three year strategy aiming to put Bentley in the best position possible to win Le Mans. The first two years – which saw Bentley back on the podium and first home behind the all-conquering works Audis – proved the team’s capability and the car’s reliability. But every member of the team knows that, in 2003, ‘best of the rest’ is no longer good enough.

Of course victory at Le Mans is not a given for even the best-prepared team, but Team Bentley is confident that everything that can be done to provide the best possible chance of victory will be in place by June.

Critical to these preparations is the Sebring 12-hours. For over 50 years this race has competed with the Daytona 24-hours as the most prestigious endurance race in the Americas. With the Daytona regulations currently rendering the Speed 8 ineligible, it was clear where Team Bentley should make its return to American soil. The last time a works Bentley raced in America was in 1922 when, in the first ever international event contested by the team, WD Hawkes competed in the Indianapolis 500 in a barely more than standard 3-litre. Pitted against a field of highly specialised oval racers there was no chance of success – indeed it came last – but still enjoyed a trouble free run and captured the imagination of the American press.

Team Bentley In 2003 From Sebring To Le Mans | Part Two