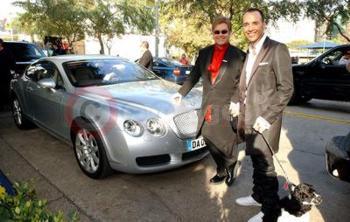 Adding an unprecedented touch of glamour to the evening's festivities, Bentley Motors auctioned off one highly anticipated Bentley Continental GT, which sold for $400,000.

Alabama native Joe Blount was the distinguished winner of the sleek coupe for $400,000 for which there is an extensive waiting list in the United States.

Voted 'Car of the Year' by the Robb Report, the Bentley Continental GT boasts a twin-turbo charged 12 cylinder, grand tourer engine and is considered the fastest four-seat coupe in the world, reaching a top speed of 198mph.

This year, the event amassed over $1 million for the Foundation, which raises international awareness and resources for individuals affected with HIV/AIDS.

Guests arrived at 4:30pm for a cocktail reception followed by a five-course dinner and viewing of the 76th Academy Awards telecast. Special event designer, Stanlee Gatti, created yet another spectacular setting for the event. The San Francisco-based designer transformed the tented pavilion into a magical space, infusing unique colors such as lime-green, cafe-au-lait and sky blue with a tropical influence.

The post-show extravaganza began immediately after the Academy Awards ceremony and celebrated the winners and nominees. Sir Elton John treated guests to a very special performance during the party, including a duet with 17 year-old singing sensation Joss Stone.

This is a 18-year+ news article, from our Bentley archive, which dates back to the year 2000.

If in doubt check with your local Bentley dealer as car prices and technical data will have changed since 2004.