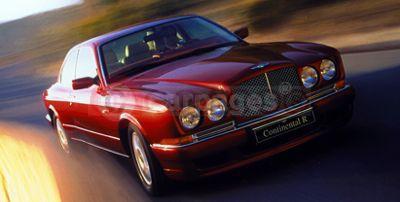 Bentley Motors has announced that it will be producing a limited number of Final Series editions of the Bentley Continental R coupé and Bentley Azure convertible. Only 52 Bentley Azure Final Series and 11 Bentley Continental R Final Series models will be commissioned between now and mid-2003 as a fitting tribute to Bentley's continued presence and domination of this exclusive sector. Although they will be the last of the current model type to be built at Crewe, plans for a new two-door range of luxury, performance Bentleys to replace the much admired Continental R and Azure range, are set to reassert Bentley's position in the upper luxury performance car sector.

Based on the current range, both the Continental R and Azure Final Series models will feature a series of performance-orientated additions designed to complement the already extensive Bentley Mulliner specification, further enhancing the car's 420bhp appeal. Both models, considered to be the most complete expression of two designs that were originally launched in 1991 (Continental R) followed four years later by the Azure, are set to become highly sought after collectors' items.

Since their respective debuts, 1533 Continentals R's and 1235 Azures have been built at the Crewe factory, confirming their enduring appeal as the ultimate expression of dynamic, yet luxurious high-speed tourers.