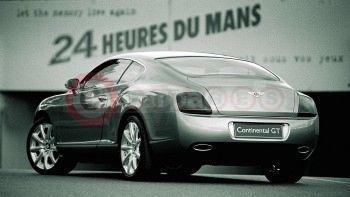 Over a year before it is due to go on sale, the Continental GT has already left Crewe to visit Bentley’s spiritual home, the Le Mans race track in France.

The Continental GT aside, there were just four invitees to this private gathering: Derek Bell, five times Le Mans winner and Bentley consultant; Brian Gush, the head of Team Bentley and Dirk van Braeckel, Bentley design director and stylist of the Continental GT. The final attendee was the Bentley EXP Speed 8 that came fourth at Le Mans this year.

‘We thought it important that the most powerful and quickest car in Bentley’s history be seen in the context of a similarly thrilling and appropriate arena,’ says Gush. ‘In the first two Le Mans the only foreign entrants were Bentley road cars, starting an unrivalled association between the two brands that exists to this day.’

It is also to be remembered that, so far as Bentley is concerned, Le Mans is no mere marketing gimmick. ‘We learn so much from our race programme that affects directly the way we build our road cars. In areas such as electronics, weight saving, engine efficiency and quick response working practices the lessons learned from the last two Le Mans have already been invaluable. As an inspiration to the workforce, it’s pretty effective too,’ says Gush.

Team Bentley will be racing next year both at the Sebring 12-hours in Florida and in a two-car assault on the top step of the podium at Le Mans in June. The Continental GT will be back again to witness it.