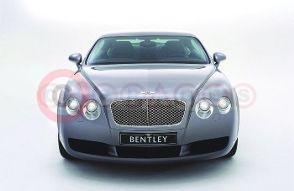 The heart of any Bentley is its engine. As the Bentley Continental GT has now made its world debut, Bentley Motors can reveal the full technical specification of the powerplant used by the fastest, most powerful four seat coupé in the world. Two figures alone are enough to whet the appetite: it accelerates from 0-60mph in 4.7sec (0-100km/h 4.8sec) and reaches a top speed in excess of 190mph (300km/h).

Engine: a W12 format, totally re-engineered for the Continental GT by Bentley

Providing the power for the Continental GT is a 5998cc, four camshaft, 48-valve, twin turbocharged W12 engine. Its power output is 560PS (411kW) at 6100rpm. Maximum torque is 650Nm (479lb ft) which may sound an impressive enough statistic in isolation, but its true significance only becomes apparent when you learn that it is generated at just 1600rpm. Typically, a performance car engine will force the driver to wait until it is spinning at between 3-5000rpm before it will deliver maximum thrust; in the Continental GT it's all there at barely more than idling speed. The engine has been engineered to deliver consistent, explosive torque all the way to its red-line.