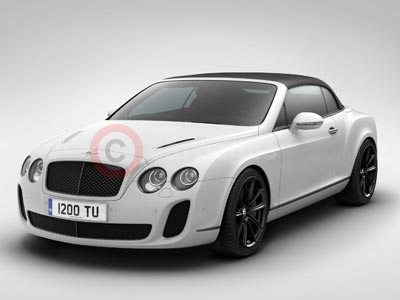 Driving the all-wheel drive, biofuel-powered 6-litre, 12-cylinder Continental Supersports convertible on the perilous frozen Baltic Sea, off the coast of Finland, Kankkunen achieved a speed of 205.48 mph (330.695 km/h) eclipsing his own ice speed record of 199.83 mph (321.6 km/h) set in 2007 in the Bentley Continental GT.

Both the new Bentley Supersports 'Ice Speed Record' convertible and Juha's record-breaking Supersports will be on display on the Bentley stand at the Geneva Show from 1st March 2011.

The additional engine power of the new convertible is the result of fine tuning of the engine to optimise the benefits of the new free-breathing air intake ducts, intercooler system and the exhaust system.

And true to the Bentley tradition of delivering instantly available and exhilarating performance in real world driving conditions, the 'Ice Speed Record' convertible will sprint from 50-75mph (80-120 km/h) in just 2.5 seconds.

In common with its Continental stable mates, the new Bentley Supersports model runs on both petrol or E85 bio-ethanol or any combination of the two. Pioneered in the Bentley Supersports coupe, this FlexFuel technology offers a reduction of up to 70 per cent in CO2 emissions on a well-to-wheel basis, a measure of a fuel's net contribution to the atmosphere, not just tailpipe emissions. The on-board fuel supply system monitors the content of the fuel tank and ensures that power and torque remain constant regardless of the ratio of petrol to biofuel.

Just 100 examples of this dramatically styled new model will be built at Bentley's Crewe factory. The Bentley Supersports 'Ice Speed Record' is distinguished by its vibrant and muscular styling cues that reinforce the uncompromising performance credentials of this extreme Bentley convertible.

The dramatic character of the four-seat Bentley Supersports 'Ice Speed Record' continues in the cockpit in which traditional Bentley craftsmanship and fine detailing are given an even more extrovert interpretation.

Traditional leather hides sit alongside a range of contemporary materials for a distinctly sporting style. This includes diamond-quilted Alcantara to doors, quarter panels and seat facings, and 'soft-grip' leather on the steering wheel and gear lever.

The Bentley Supersports 'Ice Speed Record', despite its ice racing pedigree, is clearly no 'stripped out' racer. Its highly specified interior has the highly-advanced touchscreen infotainment system from the new Bentley Continental GT that provides rich map imagery and a 30GB on-board hard drive.

An 8-inch screen displays the car's audio system, telephone, ride and comfort settings as well as the very latest navigation system, which uses both an in-car hard-disc drive and a DVD player to access route data. It also utilises dynamic navigation to avoid heavy traffic spots, locates destinations using geo-tagged photos from an SD memory card and is Google Maps-compatible for most markets.