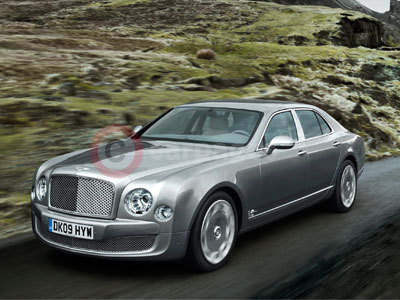 Bentley Motors has announced more details of its all-new flagship motorcar, the Bentley Mulsanne, following successful debuts at the Pebble Beach Concours d'Elegance in August 2009 and Frankfurt's IAA motor show in September 2009. More than 1,000 private customer previews of Bentley Mulsanne have been held at the company's factory in Crewe, England as well as a series of preview events held at dealerships across the UK, Continental Europe and the United States.

To be priced at £220,000 in the United Kingdom, the Bentley Mulsanne has been designed and engineered without compromise by Bentley's craftsmen and engineers to combine refined performance and unparalleled levels of luxury with the coach building elegance for which the marque has long been renowned.

Stuart McCullough, Member of the Board for Sales & Marketing for Bentley Motors, comments: "Even at this very early stage, the expression of interest we've received easily exceeds our 2010 production targets. Mulsanne's credentials are a pure expression of Bentley design and craftsmanship, and that's struck a chord with Bentley enthusiasts across the globe as well as many of the potential customers we have welcomed for tours in Crewe this year. We've been encouraged by the positive commentary, notably from our American customers as the Mulsanne was privately previewed in seven metro markets across the country."

Production of the Bentley Mulsanne will commence at Bentley's Crewe (England) headquarters in the second quarter of 2010. A newly constructed body production facility, dedicated to the Bentley Mulsanne, is being completed where leading-edge body assembly technology, such as superforming of the aluminium front wings for superb surface definition, will complement traditional, highly skilled metalworking including hand-brazing of steel joints for a 'hewn from solid' appearance.

The Bentley Mulsanne will arrive in the UK in the Summer of 2010 and will offer customers a world of infinite choice when commissioning their cars. The luxury Bentley flagship offers a palette of 114 paint colours, 21 carpet colours, nine wood veneers and 24 interior leather hides, all of which will be tanned using a decades-old process to ensure this future classic never loses its scent. In addition, through Bentley's bespoke service, unique colours can exactly match a customer's vision and taste. With more standard leather and wood veneer than any other Bentley in the modern era, the Bentley Mulsanne will take nine weeks to build.

Advanced technology is exquisitely packaged within the Bentley Mulsanne's opulent cabin. Behind its heritage-inspired dials and new glass-effect switches are leading edge features including iPod and mp3 connectivity, Bluetooth and a SIM card reader, as well as a 3G MMI system. Those opting for NAIM's premium audio system will be treated to the world's most powerful system fitted to a production vehicle - a 20-channel 2,200-watt sound experience.

Bentley Motors will announce further pricing news for international markets in the near future as well as further information about the extensive range of additional options with which the Bentley Mulsanne can be specified.

Bentley Mulsanne Images may not be UK specification cars. Colours and exterior and/or interior elements may differ from actual models.