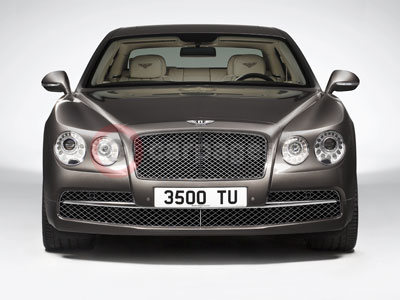 The new Bentley Flying Spur will be debut at the Geneva Motor Show on 5th March 2013.

It is the most powerful four-door Bentley to date powered by 6.0-litre, twin turbo W12 engine, which produces 625PS/800Nm. The new model has a 14 per cent power-to-weight ratio over the outgoing model which helps it achieve a 0-62 mph time of 4.3 seconds and a top speed of 200 mph. Power is delivered through a ZF eight-speed gearbox to the all-wheel drive set-up with a 40:60 rear-biased torque split with the ability to place 85 per cent to the rear axle or 65 per cent to the front depending on available traction

On the official combined cycle the New Flying Spur has recorded a figure of 19.2 mpg and CO2 emissions of 343 g/km, so not exactly green but a 13 per cent improvement over its predecessor.

The independent computer-controlled air suspension of the new Flying Spur is redesigned to maximise impact absorption and isolation. It incorporates a two-stage lowering strategy to cope with high speeds, firstly lowering the car by 5 mm at the front and 10 mm at the rear at 121 mph and then by a further 8 mm and 13 mm respectively at 149 mph.

The new Flying Spur interior has been regarded feature 600 new parts with only the sun visors, grab handles, armrests and some of the front console and controls carried over from the previous generation. You can even opt for a four or five-seat configuration with a choice of twelve hides.

There is a central infotainment is controlled through a high resolution 8” touch-screen interface, complete with Bentley’s advanced satellite navigation system and Bluetooth connectivity, while infotainment features can be controlled by voice activation. There is an eight-channel, eight-speaker audio system featuring Balanced Mode Radiator technology for optimum sound clarity and frequency range can play music from an on-board hard drive, CDs, DVDs, SD cards and via an iPod. The Naim for Bentley Premium Audio System, featuring redesigned separate subwoofers for improved bass extension and 1100 Watts of power.

A new Touch Screen Remote (TSR), allows passengers to control a variety of different systems. From climate controls and seat heating and ventilation through to the satellite navigation and multimedia systems.

Customers wishing to work on the move may order the new Flying Spur with the new Multi-Media Specification. Central to this is the Bentley Connectivity Unit (BCU) which allows portable devices, laptops and tablet computers to connect to the internet through the car’s own Wi-Fi hotspot with an active SIM and includes 64 GB of internal storage capacity. Two 10” LCD screens are installed to the backs of the front seats, while top-loading multimedia players sit in pockets fitted beneath, allowing the user to load and enjoy video, photo and music content from DVDs, SD cards, USB devices including iPods and iPads, and HDMI devices.

Each rear passenger can view separate content, or stream media from the BCU. A USB charging port keeps batteries fresh, and wired headphone ports complete the connections, allowing music and internet radio to be played directly through the BCU. Bentley wireless headphones complete the specification for the ultimate in rear-seat infotainment.

As you would expect the Flying Spur is built to individual customers’ exacting specifications. There is a range of seventeen standard paint finishes with the option of another one hundred colours. And there is an array of alloy wheels, ranging from the standard 19” classic wheel through to 21” ten spoke units.

You can even opt for the Mulliner Driving Specification which includes the choice of five additional hides and wood veneers. And includes Bentley’s traditional diamond quilting is incorporated to the seats and door panels, together with an indented leather headlining and embroidered Bentley wings to the headrests. Drilled alloy foot pedals, a knurled sports gear lever, jewel filler cap and 21” two-piece five-spoke alloy wheels in painted or polished finish complete the Mulliner suite of options.

This is a 9-year+ news article, from our Bentley archive, which dates back to the year 2000.

If in doubt check with your local Bentley dealer as car prices and technical data will have changed since 2013.

Bentley Flying Spur Images may not be UK specification cars. Colours and exterior and/or interior elements may differ from actual models.