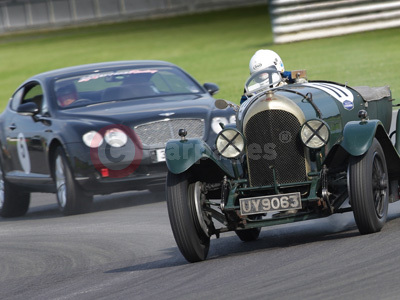 Glorious weather blessed the 60th Anniversary Bentley Drivers Club race meeting at Silverstone over the weekend of 8th - 9th August 2009, a meeting first held in 1949 and which has taken place every year since then.

"This was surely one of the biggest gatherings of Bentleys of all ages you could ever hope to see - and so many of the cars are historically famous," said Sebastian Welch, Competitions Captain of the BDC. But it's the atmosphere that sets this meeting apart, as much as the full grids and race action. "Our aim was to celebrate 60 years of BDC racing at Silverstone with two days of 'proper' club racing, from highly competitive dicing on track to a non-stop slideshow of archive pictures in the pit garage and family picnics on the grass at Copse. Racers and spectators responded with enthusiasm, as shown by the record turnout of 180 cars in the Bentley parade - where any BDC member who turns up in a Bentley, new or old, can drive three laps of the circuit."

Over the two days, 18 races welcomed full grids of both Bentleys and other invited marques. One of the highlights for spectators was the chance to see modern Bentleys racing much older machinery in both the Bentley Handicap and Bentley Scratch races.

Saturday's Bentley-only Scratch race saw 25 Bentleys taking to the track, in a race which pitted the eventual winner, the 1949 MkVI Special of Michael Higginbotham, against much older cars - such as the Vintage Bentleys of the 1920s - and much younger cars, such as the two Turbo Rs from 1990! Meanwhile, the Bentley Handicap race allowed a Bentley Continental GT (driven by Robert Gate) to come fourth overall, despite being a standard road car and looking as though it had just driven out of the showroom.

Aside from the racing, other attractions included track demonstrations of the fabulous 1933 Napier-Railton, John Cobb's 24-litre Brooklands lap-record holder; and of the mighty, 600bhp, 217mph 2003 Le Mans-winning Bentley Speed 8. Off-track displays of Bentley race cars included past Le Mans winners, Brooklands cars, and Bentleys that have raced at BDC events throughout the past 60 years.

"Those who recall the first BDC race meeting back in 1949, when the main straight was the Lancaster runway and the pits were made from straw bales, tell us that things are very different today. Nevertheless, we hope we lived up to the spirit and tradition of this great annual event," concluded Sebastian Welch.