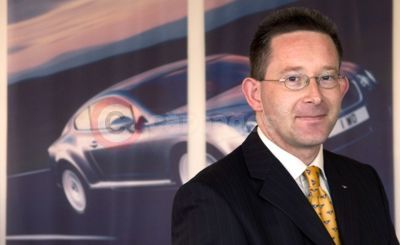 For Paul Laker, sales specialist at Harwoods of Sussex in Pulborough, selling Bentleys has always had its rewards - not least being the regular opportunities to get behind the wheel of a new Bentley. But now, Paul is sporting a rather different kind of reward - a Bentley Breitling wrist watch worth £15,000.

Paul’s new chronograph is the prize for his outstanding success in selling the Bentley Arnage model in 2005. Paul had to beat stiff competition from 21 other UK Bentley dealerships. Each month, Bentley Motors in Crewe awarded a £5,000 Breitling watch to the best salesperson, but it was 31 year-old Paul who clinched the overall prize.

And the split second accuracy of his new watch came into its own at Silverstone, home of the British Grand Prix. Also part of Paul’s reward was the ride of a lifetime in Bentley’s Le Mans-winning Speed 8 racing car - specially converted to a two-seater and driven by 2003 Le Mans winner, Guy Smith.

Delve a little into Paul’s past, and perhaps his Bentley success comes as no surprise. As a child he shunned the usual train set and played at car showrooms in his parents’ conservatory, less than a quarter of a mile from the Harwoods showroom. He would often pop in to pinch the brochures. At the age of 12, he started cleaning cars for Harwoods on Saturdays and in school holidays, and he has worked full-time for the Bentley dealership since leaving The Weald School in Billingshurst. Now he is married to Anna and has a daughter Hollie, who will be two next month.

"As a boy I always loved looking at the fabulous cars at Harwoods, and dreaming that one day I might get to drive one," said Paul. "That dream has come true, but the thrill of being driven around Silverstone in the Speed 8 was beyond my dreams. The Breitling is a wonderful watch to own, and seems to have been engineered just like a Bentley."

Simon Elkin, Harwoods general manager, said: "We are all delighted for Paul who has shown what can be achieved through dedication, hard work and a real love for what he does and a total commitment to Harwoods and our customers."

Bentley Arnage Images may not be UK specification cars. Colours and exterior and/or interior elements may differ from actual models.