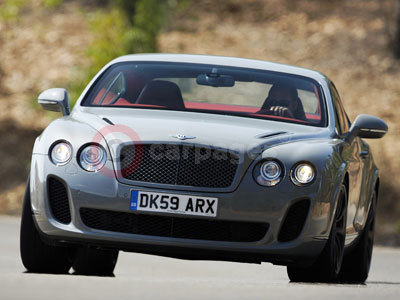 The new Bentley Continental Supersports, the first Bentley to use FlexFuel technology which enables it to run on E85 biofuel, petrol or any combination of these two fuels, has further underlined its green credentials by meeting the 85% recyclability standard (95% for recoverability) demanded of all the Bentley Continental range.

In May 2009 Bentley received the official recycling pre-certification (in accordance with the EU Directive 2005/64/EG) from the German Motor Transport Authority (KBA) - thereby becoming one of the first luxury car manufacturers to attain this standard.

The Crewe-built Supercar, which is now arriving in Bentley showrooms, is the most extreme production car in the company's 90-year history. Capable of reaching 204 mph (329km/h), it is also the lightest road-going Bentley having shed some 110kg through a broad programme of weight reduction involving the innovative use of new materials such as carbon ceramics and carbon fibre.

The achievement of this certification is testament to the endeavours of the Bentley engineering team as Dr. Arno Homburg, Head of Whole vehicle Development at Bentley Motors said: "Producing the fastest Bentley was a challenge in itself. However, we were equally determined not to sacrifice any environmental aspect in pursuit of this goal. The result is the paradox that the most extreme Bentley ever, is also the greenest."

It is one element of a broader Bentley strategy which will see by 2012 the company's average fleet CO2 emissions reduced by 15% and the introduction of a new powertrain that will by itself deliver a 40% reduction in fuel consumption. This programme is also supported at the Bentley factory where the use of gas, electricity and water have all been reduced significantly despite Bentley achieving record levels of production in recent years.

A genuine two-seater, the Bentley Continental Supersports takes Bentley into new market sectors. It has received an overwhelmingly positive media reaction and is now attracting keen customer interest. Its Flexfuel capability ensures that is fuelled for the future and, with this latest recyclability certification, customers can be assured that every effort has been taken to consider the environmental impact of all components over the entire life of the car. As Dr Homburg adds: "It is part of our responsibility as a car maker to contribute to environmental improvements and with Supersports you can see an evolution of this thinking. Even though Bentleys last a very long time - nearly 70% of all cars ever made are still on the road or in collections - we have still sought to ensure any environmental impact is minimised. The wide use of natural materials such as wood and leather and the craftsmanship inherent in their use naturally favours us here."