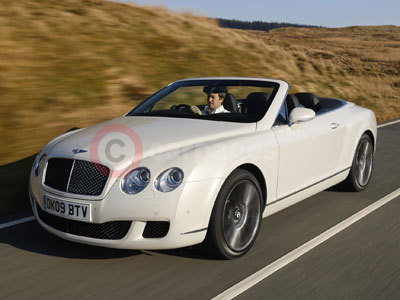 Bentley Motors, founding sponsor of the 2008 inaugural Cholmondeley Pageant of Power, will be joining this year's celebrations (18th - 19th July 2009) with some more unique cars from the company's illustrious past. Bentley will also showcase the very best of contemporary British engineering, styling and craftsmanship by debuting the world's fastest production convertible.

Although the Bentley Continental GTC Speed will not be breaking through the 200mph barrier on Cholmondeley's involving circuit, spectators will get a real flavour of this luxury Bentley convertible's awesome acceleration as it hurtles off the start start-line. The Bentley Continental GTC Speed can reach 60mph in just 4.5 seconds (from a standing start) and its sophisticated, continuous all-wheel drive system provides exceptional traction in all weather conditions.

As well as debuting the Bentley Continental GTC Speed, Bentley Motors will be running the company's 2003 Le Mans-winning EXP Speed 8 which produces more than 600bhp from its 4-litre twin-turbocharged V8 engine.

After a long absence from the Le Mans podium, which it once ruled, the Bentley team returned to France in 2001 with the EXP Speed 8 and secured third place. By 2003 'Team Bentley' and the EXP Speed 8 had secured both first and second place - recording the company's eighth Le Mans victory in the process.

The famed 4 ½ litre supercharged 1929 Bentley Blower will also be taking to the roads. Although the Blower never won at Le Mans (when it raced in 1930) it was renowned for its turn of speed and was memorably portrayed as James Bond's original car of choice by Ian Fleming.

"We're delighted to be sponsoring the Pageant of Power and also to be bringing the Continental GTC Speed to the event," commented Robin Peel, Bentley's Head of UK Marketing.

"Even during its first year the Pageant of Power created a unique, relaxed atmosphere perfect for both enthusiasts and someone seeing these cars for the first time and we believe it is set to go from strength to strength."