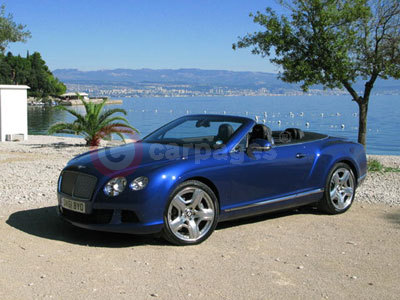 Bentley is the jewel in the Volkswagen Group’s crown, British-based but German-owned. The cars are made in Crewe, in the factory that was once home to Rolls-Royce before it was taken over by BMW and moved to Hampshire. Since the two split Bentley has thrived, producing models that are a blend of modern technology and precision manufacturing infused with a strong garnish of traditional bespoke craftsmanship. The Continental GT coupé has been a big success for Bentley, and this latest GTC convertible is at the pinnacle of the range.

This car is the second-generation GTC, and has morphed slightly in looks compared with its predecessor. It now has more tautly drawn body lines that freshen the styling within the same dignified silhouette. The grille is less raked and more vertical then before, and LED headlamps have been added to the car’s night-time repertoire. Here is a convertible that demands no compromise, a big sporty drop-top designed to cosset you, whether you drive it with the top up or down. Compared with the previous GTC, it is 70 kg lighter and has been given a wider track.

By any standards it is a sumptuous car, from its exceptional six-litre W12 engine to its £149,350 price tag. Weighing two and a half tonnes, it is packed with the best of German technology and British craftsmanship. Everything is top-notch, including the running costs for this high-performance drop-top supercar.

This is a big, heavy car, but it has a mightily powerful engine, so it is an immensely strong performer. Under that long bonnet is a six-litre twin-turbo W12 engine, equivalent to two V6 units combined into one massive motor. It delivers a power output of 567 bhp and 516 lb ft of torque. It is teamed with a new ‘Quickshift’ six-speed auto transmission. Overall fuel consumption is 17.1 mpg and the CO2 output is 384 g/km.

The top speed potential, if you could find anywhere to try it, is worthy of a Le Mans car at 195 mph. The GTC’s standing start acceleration time on a benchmark 0-62 mph sprint is Ferrari pace at under five seconds. To keep all that power firmly planted, the GTC has all-wheel drive, biased towards the back end with a 40/60 front/rear split.