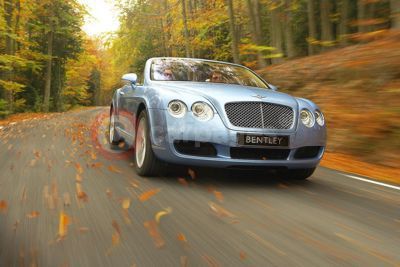 The recently launched Bentley Continental GTC convertible has garnered a brace of high-profile awards just months after its international launch. Robb Report, the esteemed US luxury lifestyle magazine, declared Bentley’s 195mph convertible its 2007 Car of the Year, and the judges from L’Automobile piu Bella del Mondo (The World’s Most Beautiful Automobile) recognised the GTC’s beauty in a special design award.

In Robb Report, the GTC beat the Rolls Royce Phantom, Bugatti Veyron and Maybach 57S to win its annual Car of the Year Awards. The panel of judges, formed by its editors, staff and 41 car experts highlighted the Bentley’s ‘remarkable driveability, superb handling’ and ‘well executed design’.

Gregory Anderson, Robb Report’s Automotive Editor, said that there was no need for a re-count after the Car of the Year voting. “This was a landslide victory in which the GTC earned first place votes from nearly half the judges, and it was among almost everyone’s top three.” Anderson concluded that the convertible Bentley “might be the only four-passenger car that can match the performance and charm of Italian sports cars and convert their devotees.”

In fact, so popular was the GTC among Robb Report’s jury that eight judges went on to order one each for themselves.

Stuart McCullough, Bentley Motors’ Member of the Board, Sales and Marketing said the company was honoured to receive the award. “Achieving this result against such stiff competition is testament to the world-class engineering skills and craftsmanship we have here at Crewe, England. It’s no surprise that the GTC has become the showpiece of the Continental range.”

This is not the first time Bentley has garnered an award from Robb Report; in 2004 the Continental GT coupe was voted its Car of the Year and in 2006 its Continental Flying Spur came a close second in the contest.

The GTC’s second accolade came from an international jury based in Milan, comprising top car journalists, architects and designers. The distinguished judges praised the Bentley convertible’s exclusive style and modern design cues, which they felt reflected the unique heritage of the Bentley marque.

This is the fourth award conferred on Bentley by L’Automobile piu Bella del Mondo jury, following the original Azure in 1995, the Arnage saloon in 2002 and the Continental GT coupe in 2003.

Commenting on the latest award, Bentley Motors’ Design Director, Dirk van Braekel, said: “It is a great honour to win such a prestigious award and for our design to be recognised by such an important panel of experts. These awards have highlighted consistently over the years that great design is the hallmark of Bentley.”